‘All My Sons’ at The Matrix Theatre 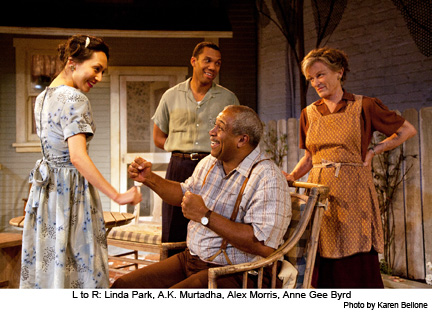 How can one critique an Arthur Miller play?  Miller, one of theater’s long-enduring icons, has written such classics as “Death of a Salesman,” “The Crucible” and “All My Sons,” which opened on Broadway in 1947.

Miller’s “All My Sons” gets exactly that in The Matrix Theatre’s current production directed by Cameron Watson with an invitingly detailed backyard set designed by Emmy Award-winning Jon Iacovelli.

The play languidly opens with the introduction of the Keller family and their neighbors about three years after Joe Keller and his business partner were accused of producing defective airplane parts causing the deaths of about 20 U.S. servicemen. Joe got off, while his partner is sitting in prison.

Kate Keller is hoping beyond hope that Larry, their son missing in action three years ago, will someday soon come back into their lives. Larry’s younger brother Chris has invited Ann, his childhood friend/daughter of his father’s imprisoned partner/former girlfriend of his brother Larry to visit, and he intends to propose marriage.

Like peeling layers off an onion, secrets keep getting revealed as the characters interact in different pairings.

Anne Gee Byrd hauntingly portrays Kate Keller, the family’s voice of reason or insanity, depending on whom you ask.  Byrd convincing balances her improbable belief that her lost son will return with her very lucid advice to her somewhat-conflicted husband.  Is she the most sane or insane character of this piece?

Alex Morris IS Joe Keller, a family man striving to make a better life for his family — but at what cost? Is he guilty in his involvement with the defective parts? Did he sell his business partner down the river to save his own neck? Is he in denial of his culpability?

A.K. Murtadha limns the surviving son Chris Keller.  He worships his father and totally believes in his father’s innocence.

Linda Park as Ann, the Keller brothers’ love interest, adds sparkle in her scenes as the grown-up child who returns to her old neighborhood — after leaving when her father went to prison. Park’s best scenes have her alternately confronting and cajoling the mercurial Kate.

James Hiroyuki Liao as Ann’s brother George makes his entrance in the second act with just the right mix of intensity, headstrongness and nostalgia, heightening the conflicts already brewing to a boil.

Anita Barone and Maritxell Carrero make their respective impressive impressions as two neighborhood wives: Barone in the scene where she tells Park she needs to settle down (anywhere but in that neighborhood) and Carrero in her delightfully coy and flirty scene with Liao.

Taylor Nichols as Barone’s character husband/doctor gives a full-dimensional read as a man who settled instead of reaching for his dreams.

The two sides to every issue, of family loyalty, integrity, hope and settling, make for an intense experience of theater, one that keeps you riveted to every word and every secret revealed — to the very end. Brava!

This production touts its intentional multiracial casting.  Don’t believe any words in Miller’s original script were changed to address the multiracial cast.  With the acting so strong and involving, I did not even notice the multi-racial casting as a plus or a minus. As a person of color, I have always welcomed color-blind casting.

However, if this is realistically set in post-WWII, a black man and an Asian man would not necessarily have been business partners winning a U.S. military contract; a black man wouldn’t easily marry a white woman; and their next-door neighbors at the same socioeconomic level would not be Latinos. Just saying!