‘Art’ at The Pasadena Playhouse 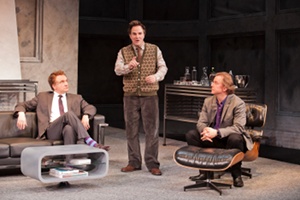 Playwright Yasmina Reza’s (who also wrote the 2009 Tony Award-winning “God of Carnage”) fast and witty repartee flows with ease from the mouths of the talented trio on stage — Roger Bart as the “spineless amoeba” best friend Yvan; Michael O’Keefe as Serge, the initiator of the drama; and Bradley Whitford as Marc, the antagonist of the ensuing debate.

The friendships and relationships of these three become examined and analyzed when Serge buys a white-on-white painting for 200,000 Euros.  Marc laughs outright upon seeing the blank canvas and being told of the price. Serge is appalled at Marc’s blatant outburst with no attempt to even pretend to like his new acquisition. Both try to get Yvan to side with their opposing opinions, and both succeed, much to their frustration.

As smooth as Reza’s words coming trippingly off Whitford’s talented tongue, Bart gradually steals the show, especially with his non-stop, oft-times rambling but still rational monologue lasting minutes during which he doesn’t seem to take a breath. And then O’Keefe appropriately deadpans, “And then?” Bravo!

Tom Buderwitz designed the gorgeous modern and classically simple apartment set of Serge. The program notes that this set represents the three characters’ individual apartments and that the locale is Paris, France. With no change of set pieces, Buderwitz’s set is realistically only Serge’s living room.  And with no references, audio or visual, to the apartment being in Paris, why Paris instead of New York, and why Euros instead of dollars?