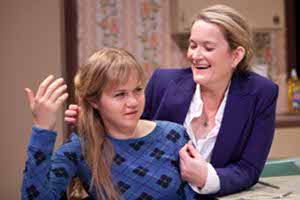 Daisy Foote’s gripping “Bhutan,” now in its West Coast premiere at LA’s Rogue Machine Theatre, is a time-bending tragedy that chronicles the disintegration of a small New Hampshire town. Focusing on one hard-luck farm family, Foote expertly weaves the personal with the socio-political, delivering a grim, last-gasp portrait of rural America.

The Conroy clan appears plucky and insular. Mary, a disabled widow played with white-hot intensity by Ann Colby Stocking, hangs on to the family farm by her shredded fingernails. Having raised her two children by herself after the bizarre accidental death of her husband, she employs a mix of despotism and emotional blackmail to keep the family together against the incoming tide of change. But she is ultimately no match for the unforgiving reality that unravels her fiction of a stable home. For people like the Conroys, change really does mean the end of the world.

As local farms are increasingly bought up and subdivided, the town is altered to accommodate the influx of educated, upscale new arrivals – among them, the well-traveled, retired university professor next door. Although the sophisticated neighbor never appears, her presence is the inexorable catalyst that finally vanquishes Mary’s illusion of safety. In befriending Mary’s young daughter, Frances, the old lady opens a door that cannot be closed again. Having been introduced to literature and music, and spellbound by her new friend’s photographs of faraway places (Bhutan, for one), Frances dreams of college and travel to Bhutan. As Frances, the incandescent Tara Windley is the heart of the drama. Appearing about 15 and very fragile, this subtle young actress commands the stage, imperceptibly growing in stature and resolve, until the final shattering scene.

Foote begins the play in the shabby kitchen of the farmhouse on Frances’ older brother Warren’s 18th birthday. Cast too early as Man of the House, the doomed Warren struggles under the relentless decay of the aging farmhouse and his mother’s increasing need.  Marco Naggar inhabits this character with a raw and shocking vulnerability. His metamorphosis from clueless schoolboy to hardened prison convict chills the blood.

Mary’s alcoholic sister Sara is played with a ferocious and desperate jollity by Tracie Lockwood. A kaleidoscope of conflicting emotions, Lockwood is by turns hilarious, repugnant, and pathetic. Among many compelling production elements, this performance, alone, is reason enough to catch “Bhutan.”