‘Bring It On: The Musical’ at the Ahmanson Theatre 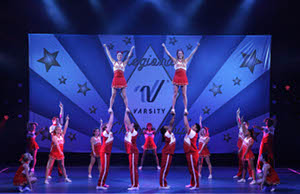 "Bring It On: The Musical" is onstage at the Ahmanson Theatre. Photo by Michael Lamont

Finally, a musical you can bring your parents to! “Bring It On: The Musical” began its national tour at the Center Theatre Group/Ahmanson Theatre on Nov. 11. With a mixture of “Clueless” and “All About Eve,” a sprinkle of “Rent,” and a dash of “Flashdance” trickery, “BIO” dazzles, thrills, entertains multiple generations, and deals with important issues (including your first time, fitting in, being excluded from the popular crowds, the importance of hard work, the value of friendship, the beauty of acceptance, wearing the right clothes)!

“BIO” tells the story of Campbell Davis, the popular head cheerleader at the predominantly white Truman High who must cope with starting over as the outsider when she is forced to transfer to the racially diverse Jackson High.

Taylor Louderman, as Campbell, not only sings, dances, and acts, she also balances perfectly atop the human pyramids in the spectacular, precision tumbling routines that do actually win cheerleading contests. Louderman’s soaring vocals wow in the opening number “What I Was Born to Do” and in the first act closer “Bring It On.” In the opener, the agile cast performs an exciting cheerleading routine full of lifts, tosses, throws, and flips up to the heavens that sets the bar high for the rest of the evening.  And luckily, subsequent cheerleading and dance numbers do stunningly satisfy, thanks in part to an ensemble featuring some of the nation’s most skilled competitive cheerleaders.

As fate would have it, the only person from Truman High also transferred to Jackson happens to be the plus-sized Bridgette, whom Campbell didn’t completely ostracize. (She allowed Bridgette to be the cheerleaders’ mascot, completely covered in a parrot costume).

Ryann Redmond gives her Bridgette so much likability amidst her vulnerability and low, low self-esteem, one can’t help but root for her.  Starting as the shy girl always trying to fit in, flirty attention from hipster Twig transforms Bridgette into her own woman and her nice, sweet vocals  (in the first act’s “Tryouts”) turn into sexy, womanly growls  (in the finale “I Got You”).  Nicolas Womack charms not only Bridgette but also the audience with his crazy, lovesick, and seducing antics as Twig.

Bridgette introduces newbie Campbell to Jackson High’s queen bee Danielle and her crew Nautica (a feisty Ariana DeBose) and La Cienega.  Adrienne Warren’s Danielle can sing with the very best of Broadway’s divas and has just the right dose of attitude to be the savvy crew leader.  And what a voice Warren has!  Though not to take leadership away from Danielle, Gregory Haney’s La Cienega has more attitude and fierceness and womanliness than all the women in Jackson High put together – and he’s a drag queen! Haney commands the stage as he sings the sass out of “It Ain’t No Thing.”

Everyone in this large cast brought it on, but shout-outs also need to go to: Kate Rockwell for her vicious (but fun) portrayal of “bee-och” Skylar, Jason Gotay for his romantic croonings as Campbell’s boyfriend Randall in “Might as Well Enjoy the Trip,” and Elle McLemore for her lethal interpretation of the two-faced, backstabbing Eve Carrington, I mean, Eva.

There are plenty of great one-liners, like “Ra ra ra, bla bla bla.” A male cheerleader sings, “I pick up girls every day.”  Upon seeing Bridgette, bee-och Skylar yells in the opposite direction, “Puberty, don’t go. She needs you.”  Skylar says, “Eva’s a mean bitch. (pause) I know I’m a bitch, but I’m mean to be helpful.”

Yes, kids, take your parents to see this two-and-a-half-hour lesson in high school survival.  They might better understand what you have to go through in your formative pre-college years!