‘Classical’ Theater at The Fountain and Theatricum Botanicum

Classical music and opera lovers can experience another side of their passions with a couple of local theater offerings this summer. The award-winning Fountain Theatre presents the LA premiere of “Opus,” a play about a “high-strung” string quartet. And Theatricum Botanicum offers “Master Class,” Tony Award winner Terrence McNally’s play about opera diva Maria Callas.

Here are the details from these two popular theaters:

Sex, drugs and chamber music! Talent and temperaments collide in this amusing and compelling behind-the-scenes look at a “high-strung” string quartet. A world-famous ensemble threatens to unravel as it prepares for a high-profile performance at the White House when its most talented member goes missing and a young woman is hired to take his place. Smart, funny, entertaining and insightful. You’ll never listen to a string quartet the same way again.

“Opus” was written by Michael Hollinger, a violist-turned playwright who graduated from the Oberlin Conservatory of Music and received a Master’s degree from Villanova University, where he is an associate professor of theater. It’s interesting to note that Director Simon Levy was a music major who played both trumpet and sax and considered graduate studies in conducting before turning to theater. “Opus” stars Daniel Blinkoff, Jia Doughman, Gregory G. Giles, Christian Lebano, and Cooper Thornton.

In conjunction with the Los Angeles premiere of Opus, The Fountain Theatre will present two live concerts by Los Angeles-based string quartets, on Sunday, June 27, (Quarteto Fantastico) and Sunday, July 11, (TBA) at 8 p.m.  Quarteto Fantastico (Chris Woods and Paul Cartwright, violin; Miguel Atwood-Ferguson, viola; Peter Jacobson, cello) is known for the skill of its members in the art of improvisation on themes, or “quotations,” from classical pieces as well as from jazz, Indian ragas, hiphop, and world music. 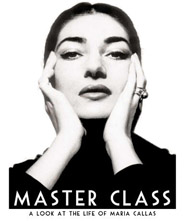 Ellen Geer stars as internationally renowned soprano Maria Callas, who had a legendary voice and an equally legendary life as one of the world’s most celebrated (and gossiped-about) opera stars.  In 1971, Callas taught a series of master classes at Juilliard.  Outspoken in her artistic beliefs and uncompromising in the musical understanding she sought to communicate to 25 fortunate students, Callas worked through her legendary arias from Mozart, Verdi, Rossini, Puccini, and others. Terrence McNally’s play finds Callas near the end of her career, her voice almost gone, as she instructs a group of young singers aspiring to the heights of fame and fortune with wicked humor, unrelenting criticism and deeply personal stories.

Theatricum Botanicum’s 2010 Summer Repertory Season also includes productions of William Shakespeare’s “Hamlet” and “A Midsummer Night’s Dream,” the world premiere of a new stage adaptation by Ellen Geer of Alexandre Dumas’ “The Three Musketeers,” and “Carry It On,” a rip-roaring tribute to the heroes of American history told in their own voices that will be presented as a fundraiser with celebrity guests on July 16, followed by an eight-performance run by members of the Theatricum company beginning Aug. 7.