‘Fairy Tale Theatre – 18 & Over’ at the Matrix Theatre 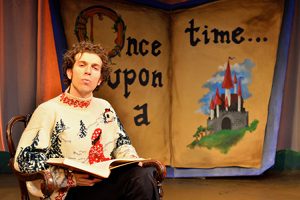 J. Michael Feldman as Narrator Percy Rutherford in “Fairy Tale Theatre – 18 & Over” at the Matrix Theatre / Photo by Lew Abramson

Ree-dic-u-lousss!!! So over the top, “Fairy Tale Theatre – 18 & Over” really works at keeping the audience entertained — alternately howling, enchanted, and grossed out for 85 intermission-less minutes! Never heard fairy tales like these as a kid! The show, presented by the Inkwell Theater, is onstage at the Matrix Theatre through Feb. 11.

“Fairy Tale’s” author J. Michael Feldman is also onstage as the Narrator when not seamlessly inhabiting various non-human creatures of his seven fables garbed in Stephen Rowan’s hysterically ingenious costumes — sight gags in themselves. Rowan also gets credit for the many clever puppets and props this troupe of non-humans interacts with.

The rest of the attractive and very able cast (puppeteers/performers Jess McKay, Matt Cook, and Tina Huang; and featured performers Courtney Pauroso and Eileen Mulanee) also inhabit their non-human roles with the utmost commitment and talent. This gifted company succeeds in getting the audience to suspend disbelief that they, actors on stage wearing furry outfits, are spiders or squirrels or termites, even when they’re in plain sight working the various puppets. Very nice!

The Narrator frequently breaks the fourth wall talking to the audience, prepping us for the fables to come, and then at the end of each, reciting the moral of each fable in this smoothly paced outing directed by Annie McVey. The first involves a pair of squirrels (Pauroso and Feldman) who find they really like each other because of all their similarities.  The second pits a bi-polar polar bear (Feldman) against an Eskimo puppet. In the third piece, Feldman’s a bee that’s not trying to hurt anyone but keeps being attacked by everyone.

The fourth revolves around a gay termite couple (Cook and McKay) who finally meet their girl spider friend’s husband. Here, Feldman is costumed as a black spider with eight long legs. (Brilliant costume and brilliant maneuvering of these legs by Feldman!)  The gay couple debate how to tell their spider friend (Huang) that she’s married to a “Gasp!” gay spider.  Gay stereotypes are displayed, discussed, and turned inside out and upside down in this sketch to funny, funny results.

The fifth fable illustrates how a centipede (consisting of Feldman as the head and Cook as its rear) carries his groceries, dry cleaning, baby centipede in a basket and Starbucks from his car to his home. No words, just centipede sounds, and, oh yeah, the frequent laughter from the audience.

The sixth skit features a dog-loving monkey couple (Mulanee and Feldman) who invite their non-dog-loving monkey friend (Cook) over. Howling you hear is not just from the menagerie of dog puppets/puppeteers on the stage, but the audience howling, or groaning, at the gross-out sections of this skit.  Trust me, you will groan when you see this!

The final fable centers around a cloud (Feldman) flirting with another cloud (Pauroso).  Double entendres abound in sensual overload with bolts of lightning, splattering of rain, and wetness of fog.  These are some sexy clouds!

What a way to learn morals!