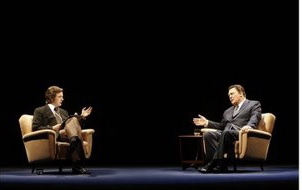 If you saw Ron Howard’s Oscar-nominated film, “Frost/Nixon,” you know what a dramatic duel of words and wit David Frost’s 1977 television interviews with President Richard Nixon were. Now, Center Theatre Group gives LA the chance to see the play on which that movie was based and experience the optimal format for this battle of wills. “Frost/Nixon” runs March 12-29 (preview March 11) at the Ahmanson Theatre.

Olivier Award-winning director Michael Grandage, who directed Michael Sheen and Frank Langella in the original London production of Peter Morgan’s 2006 play, comes to the downtown LA stage with a cast of 10, including Alan Cox and Stacy Keach in the respective title roles. Morgan, who wrote the screenplay for Howard’s film, was also the screenwriter for films such as “The Queen” and “The Last King of Scotland.” “Frost/Nixon,” his first play, received three Tony nominations (best play, direction and actor) and won one (Frank Langella as Nixon).