‘Fruit Fly’ at the Celebration Theatre 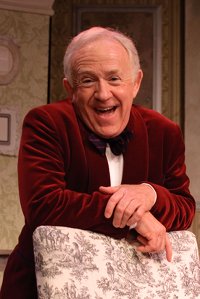 Leslie Jordan’s latest autobiographical piece, “Fruit Fly,” currently onstage at the Celebration Theatre, provides 80 minutes of what he does best — storytelling. Those familiar with Jordan’s previous solo pieces (including “Like a Dog on Linoleum” and “My Trip Down the Pink Carpet”) will not be disappointed.  Those new to the Emmy winner (for “Will & Grace”) will easily enjoy “Fruit Fly” as a stand-alone piece.

As ably directed by David Galligan, Jordan’s growing-up-gay tales keeps you alternately howling and tearing up at a breakneck pace.  Delightful vintage family photos projected upstage capture various important moments of Jordan’s upbringing in Tennessee in this, his attempt to answer the all-important, age-old question: “Do gay men become their mothers?” Jordan’s childhood photos obviously reveal the young Jordan’s more artistic bent.  Realizing this, his mother and one of his grandmothers built him a “secret garden” where he could freely do all the non-boyish activities he preferred doing. “But don’t mention this to your father,” they warned.

Jordan thankfully talks a lot, but unlike one of his younger twin sisters, as he says in an aside, he has something to say. Jordan animates, impersonates, lives out each character of his story for the audience—be it his mother Peggy Ann who has a bout of hysterial blindness; his trying-to-be-supportive father Alan who patiently attempts to teach him how to play sports—any sport; his loving nanny Roberta who reluctantly gives him his first cud of chewing tobacco; Miss Odessa, a black speakeasy proprietress who encourages his Tina Turner impersonation; or various drag queen cohorts he hung with. This one-man show’s not so much a standard monologue as scenes of dialogue with the people populating Jordan’s narrative. And what a narrative he has!

Performances continue through Feb. 18 at the Celebration Theatre, 7051B Santa Monica Blvd., Hollywood. Showtimes are Thursdays, Fridays and Saturdays at 8 p.m., Sundays at 3 p.m. For tickets, call (323) 957-1884, or visit www.celebrationtheatre.com.