‘Hershey Felder in Abe Lincoln’s Piano’ at the Geffen Playhouse 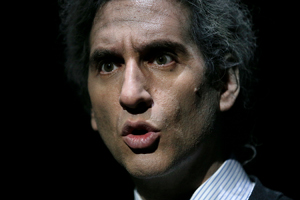 Felder certainly knows his way around Americana music. His early childhood ivory ticklings of Gershwin’s “Rhapsody in Blue” led to later research on Gershwin (which inspired the creation of his “George Gershwin Alone” musical play) and a chance encounter with Abraham Lincoln memorabilia, which became the genesis of this new play’s entertaining, enlightening historical recount of the last moments of Lincoln’s life at the Ford Theater, featuring American hymns and classics.

Partly told from the perspective of the attending physician who was there that fateful April 14, 1865, we learn how the evening unfolded with Felder acting out all the various characters present: the physician, Mrs. Lincoln, the actress of the evening’s performance, the president’s cabinet.

Though there were moments deserving of applause, Felder never paused long enough for acknowledgement or interruption. Not until after his last piano chord and lights out did he accept his overdue, much deserved adulation.