‘I Love Lucy Live on Stage’ 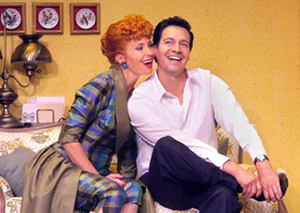 Sirena Irwin as Lucy and Bill Mendieta as Ricky in "I Love Lucy Live on Stage" at the Greenway Court Theatre. / photo by Ed Krieger

Who loves Lucy?  From the production I saw at the Greenway Court, everyone involved in “I Love Lucy Live on Stage.”

Rick Sparks has staged and directed a very affectionate homage to those involved in the original “I Love Lucy” sitcom. From the replication of the Ricardos’ living room, detailed down to a pair of Asian figurines atop the mantel  (kudos to set designer Aaron Henderson), to the re-creations of various 1950s TV commercials to the faithful re-enactments of the original Jess Oppenheimer, Madelyn Pugh and Bob Carroll Jr. scripts.

But Irwin and Mendieta really nail their spot-on impersonations of America’s first TV couple. Irwin is pitch-perfect in her Lucy wailing and Lucy muggings — and Lucille Ball’s comedic timing. Mendieta’s mangling of English words, his swinging hips, and his “Ba-ba-loos” make his Ricky timeless and sexy in any era. Joffrey and Chott have their finest moment on stage as they joyously Charleston their fancy footwork auditioning for Ricky’s producer friend.

In “I Love Lucy Live on Stage,” the theater audience becomes the studio audience for the “live filming” of two episodes of “I Love Lucy — “The Benefit” and “Lucy Has Her Eyes Examined.” In what would be the role of a present-day warm-up comedian, Mark Christopher Tracy deftly guides the audience through the various “technical hurdles” of “live filming” while introducing the various commercial breaks sung and danced by a talented ensemble (including himself). The harmony vocal group Crystal Tones (Kerri-Anne Lavin, Cindy Sciacca, Gina Torrecilla, Tom Christensen, Gregory Franklin, Ed Martin) wildly succeed in their commercials being entertaining and funny the way the Emmytones on this year’s Emmy telecast should have been.

A live six-piece band (with conga drums, of course!), under the sharp direction of Wayne Moore, entertains both as the Ricky Ricardo Orchestra and as the musical backup for all the hysterical commercials (Alka Seltzer, Chevrolet, Halo Shampoo).

Shout-outs go to costumer Shon LeBlanc for her gorgeous 1950s dresses and the multi-colored, ruffle-sleeved shirts for the Orchestra, and to sound designer Cricket S. Myers for her hysterically, precisely timed doorbell chimes.

This show is a must-see for “I Love Lucy” aficionados as they will easily recognize the setups and situations of the two episodes.  New fans to Lucy will just get caught up in the infectious fun of this 90-minute, intermission-less show set in a much more innocent and naïve time.