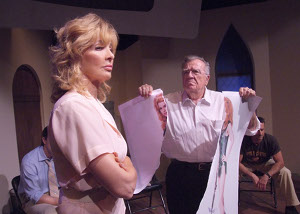 Golden Globe winner and Academy Award nominee Anne Archer heads a very believable cast in “Jane Fonda in the Court of Public Opinion” at the Edgemar Center for the Arts. The play is a behind-the-scenes look at Jane Fonda’s not-so-secret meeting with a group of hostile war veterans protesting the use of their small-town Waterbury, Conn., as the filming location for her latest film with Robert DeNiro, “Stanley & Iris.”

Though not looking like, dressing like or coiffed like Jane Fonda, Archer compellingly channels the strength, determination, and sincerity of Fonda’s convictions as she defends and explains her anti-war activist actions to a group of angry Hanoi Jane-hating veterans — convincingly portrayed by Archie Bellows, Robert Foster, Mark Gadbois, James Giordano, Jonathan Kells Phillips, and Don Swayze. All get their individual moments to shine, expressing their respective reasons for hating Fonda and revealing, some for the first time, their own secret war blunders.

Effective use of newsreel footage illustrates the horrors of war (a Vietnamese lad shot point-blank in the head). Also powerful are various photo ops of Fonda in her anti-war activist glory (singing and dancing in the F*** The Army tour, her version of the USO tour; protesting with the Black Panthers) and the video that turned American patriots against her –Fonda singing (in Vietnamese) and playing in the seat of a North Vietnamese anti-aircraft gun.

Seven-time Emmy-winner Terry Jastrow directs (with co-director Michelle Danner) his balanced script with an even, steady hand, keeping the vocal explosions spewing at an almost-uncomfortable pace in this high, high- tension-filled church meeting room. Fonda’s publicist (played by Ben Shields) finds the only person and place in Waterbury to have this face-to-face — in Reverend John (nicely essayed by Steve Voldseth) and his church.  One cannot fault any of the veterans’ eventual responses, positive or negative, to Fonda’s defense of her actions.

Be ready to shred a few tears near the end of this effective, makes-you-think hour-and-45-minute show.