‘Moses Supposes’ at The Zephyr Theatre 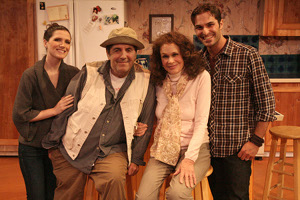 Unfortunately, this two-hour-plus comedy mines no laughs. Fortunately for Melaver, Director/Producer Lee Sankowich deftly steered his talented cast of four through a shaky first act to wrenching heartstring-tugging scenes to a satisfying conclusion.

“Moses Supposes” is as much a comedy as one of Sankowich’s first successes, “One Who Flew Over the Cuckoo’s Nest,” was/is.

The play opens with the Greens’ two grown-up children back home to plan their parents’ anniversary party. Elijah Kranski (as gay brother Raymond) and Sarah Sankowich (as vegan med-schooled doctor-to-be Cece, and coincidentally, the director’s daughter) inhabit their brother/sister roles comfortably and realistically, bickering with each other and second-guessing their not-yet-home parents in a briskly paced exchange.  Cleaning out their mom’s freezer, they find frozen relics from decades past. This cleaning out succeeds as a valid piece of stage business, but fails to really figure integrally in the plot or reveal any clues to Cookie’s current state of mind.  A freezer is not the appliance needed to house food for 150 guests coming the very next day. And no Southern housewife worth her salt would ever serve frozen hors d’oeuvres right out of her freezer!

David Provol essays Marvin Green, the retired patriarch of this family of four, as a wacky, physical tics-laden loudmouth, making him initially the most unsympathetic character of the four.

Except for some funny one-liners in Melaver’s script (e.g., in instructing Raymond about how to un-invite a guest of considerable girth, Cookie says, “Just tell her it’s a fat-free party!”), this theatrical piece plays better as a drama than a comedy as it tugged on my heartstrings much more than it tickled my funny bone (or that of the rest of the attending non-laughing audience’s for that matter).