‘Next Fall’ at the Geffen Playhouse 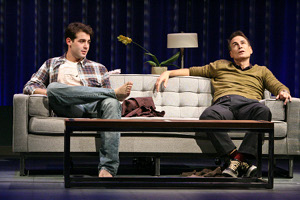 A stunningly spot-on cast, led by Geoffrey Nauffts, the playwright himself, makes for a mesmerizing two-and-a-half-hour theater experience with “Next Fall,” deftly directed by Sheryl Kaller, at the Geffen Playhouse.

The West Coast premiere of “Next Fall” opens with a draped landscape of a scenic park in its autumnal browns and oranges with the peaceful sounds of birds chirping. The sudden sounds of cars crashing interrupt this idyllic picture, and the drape disappears to reveal a brightly lit, mint-green hospital waiting room.

Kudos to set designer Wilson Chin for his beautiful set pieces (the rooftop, the bench in the park, the “bachelor’s” pad, the hospital room) smoothly gliding onto and out of the main hospital waiting room set.

Nauffts’ tightly written script wastes no words to relate the engrossing, delightful, yet tragic story of Luke, the patient all are waiting anxiously for, with the five people most influential in his life — all fully developed three-dimensional, flawed characters. Nauffts is also onstage as Luke’s lover, the self-sabotaging Adam, the most unsympathetic character of the group. For instance, instead of helping Luke “de-gay” their apartment minutes before Luke’s father Butch comes to visit, Adam takes this inopportune moment to rail on Luke for not coming out to his parents.

Lesley Ann Warren astounds with just the right mixture of hyper craziness and knowing motherly love as Luke’s birth mom Arlene, who through various addictions lost touch (for long periods of time) with her son. Especially moving is the quiet, very revealing scene between Arlene and Adam as she explains/excuses her relationship with Luke. Warren possesses so much stage presence; she commands the audience’s attention even performing the most menial task, like searching through her purse.

Jeff Fahey as Butch balances the right amount of machismo and sensitivity to make you simultaneously hate his homophobia and sympathize with his doomed relationship with his son.

Betsy Brandt winningly plays Holly, the owner of the candle shop where both Adam and Luke currently work. Brandt expertly balances her boss/friend character, alternately bursting out with her carefree joie de vivre and then, moments later, dispensing her wise sensibilities to talk sense/make sense to either Adam or Luke.

Ken Barnett successfully depicts Brandon as a cipher, as his character’s relationship to Luke isn’t clearly explained until near the end of the second act.  And when Brandon does explain, it’s a “Whoaaa!” moment — for various reasons.

In the pivotal role of Luke, James Wolk charms and seduces (in flashback scenes), especially in his first introduction to the Geffen audience when he flirts with Adam on a deserted rooftop.  As Wolk portrays Luke, one can easily see why Adam fell in love with him and why his family and friends dote on this caterer waiter/budding actor. Wolk’s/Luke’s vulnerability and wide-eyed innocence make it easy for the audience to empathize with his juggling of his religious beliefs with attraction to men.