‘O(h)’ at the Actors Company Theatre 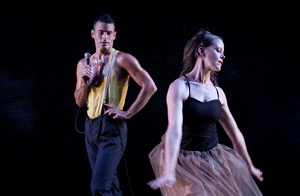 For a compelling hour, performance duo Liz Casebolt and Joel Smith entertain and inform as they deconstruct their creative choreography process in “O(h),” currently onstage at the Actors Company Theatre. Cleverly written by this pair, the show simultaneously pays homage to and skewers the art form of dance.

Casebolt and Smith deftly demonstrate various modern dance moves and gestures while explaining their meanings and purposes to the audience. Through the course of their show, these same sequences of gestures and movement will repeat themselves accompanying two other totally different scenarios. Very impressive!

The evening begins with Casebolt and Smith showing the audience just exactly what they won’t be performing, all the while expounding on every arm thrust, every handclap, every chassé.  After laundry-listing the limitations of “just being a duet,” they dance everything they can as a duet. Their hilarious “Proud Mary” parody starts off nice and easy and then unleashes Smith’s wild Superman briefs-clad bumps and grinds.

Then they split to perform their solos. Smith begs the audience to let him catch his breath first, which he does — literally — reaching out for it, jumping up for it, chasing after it for minutes, until he finally does catch it and plops it back into his mouth. Smith teases the audience with promising to perform his next dance sans Superman briefs, but, alas, doesn’t drop trous.

For her solo turn in the spotlight, Casebolt sings “I Feel Pretty,” hysterically commenting on each line. And she’s got a good, strong voice!

Though not mentioned in either “bio(h)graphies,” the audience can easily see formal dance training, especially with Smith’s high leg extensions and very pointed toes. Only someone who can really dance can really know how to (and has the right to) lovingly make fun of dancing.

Kudos to Casebolt and Smith for bridging the vast divide of modern dance aficionados and a non-dance audience.