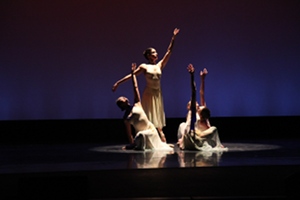 Circling together with lilting skips or stepping, heel-toe, with contained style, Nicole Mathis’ three women – Ruth Fentroy, Meagen Mendoza and Ellen Rosa – suggest solemn community as “Sunken Ladder” begins. Their easy musicality shifts from grounded to ethereal as Gorecki’s driving beat gives way to Saint-Saens’ trilling runs, and dark hair and dresses swoop through space. Although breaks between pieces in the sound score are sometimes choppy, Mathis crafts a compelling journey from the earthly to the celestial through evocative musical choices and interactions between the dark ladies and their spirits – nymphs in white smocks who emerge and echo and leave the mournful three alone in darkness.

An excerpt from José Limón’s modern dance classic, A Choreographic Offering, performed by high school students from Southern California’s Idyllwild Arts Academy, testifies to the school’s excellence and closes the first act with an exhilarating rush of warm color, clear shape, and swirling energy. First presented by Limón in 1964 as a tribute to his mentor, Doris Humphrey, Offering references 14 of her works and is an invaluable window into the modern dance lineage that silently influences so much contemporary work. Always a joy to experience, here the masterpiece shines with the fresh spirit of youth.

Judy Pisarro-Grant, veteran resident choreographer with La Danserie, presents the curious “things fall apart” after intermission. The six dancers’ voluminous purple and orange tutus lead me to look for humor that does not surface, and the title prepares me for a striking shift or break-down that I don’t detect in the flow of contained, ordered movements. But unfulfilled expectations aside, Pisarro-Grant’s solos for Meagen Mendoza reveal the dancer at her best, folding her torso into dramatic bends and extending limbs with a control that suggests she moves the music at will. And the choreographer colors the work’s final section with a gentleness that intrigues as it slips between and seeps through the dancers’ movements. Hands brush together as dancers pass, and arms flick lightly with subtle musical accents. All six women bend at the waist, rock back on their heels, and lift their toes to sweep fingertips tenderly along balls of feet.

In her premiere, “The Sunset,” Rei Aoo is a lonely, aging clown slumped on a park bench instead of a jolly swagman camped by a billabong, but as the Australian popular anthem plays, its plea to “come a-Waltzing Matilda” sounds like the cry of her heart. Our clown makes unsuccessful (and apparently painful) attempts to dance, until Kathryn McCormick – in yellow dress and delightfully bright, folksy steps à la Oklahoma – appears and invites Aoo to join her joyful waltz. America didn’t vote McCormick into last season’s So You Think You Can Dance finals for nothing. She’s altogether captivating, and we share in Aoo’s sense of loss when she flits away as suddenly as she arrived.