‘South Street’ at The Pasadena Playhouse

“South Street – A New Musical Comedy” at The Pasadena Playhouse benefits from a strong cast and a visually stunning set.  This new musical by Richard Addrisi (music & lyrics) and Craig Carlisle (book) chronicles the history of Sammy’s Place on South Street in Philadelphia from its origins in 1980 as The Brass Pole, a strip joint, to its status as a popular neighborhood hangout in 1997.

Colorful scenic design by Andy Walmsley with the vividly reproduced storefronts of Philly’s South Street smoothly turntables/revolves into the interiors of Sammy’s Place. 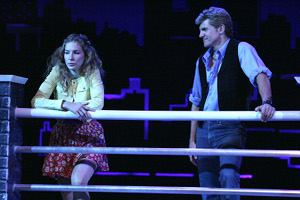 The central plotline begins with Cloe (Maria Eberline) and her little brother Norton (Andy Scott Harris) travelling to The Brass Pole to live with their aunt, who, unfortunately, no longer works there.  With nowhere else to go, Cloe auditions for an available stripper position and nails it. Owner Sammy (Tom Shelton) and his gal, the lead stripper Sybil (Valerie Perri), take a liking to the homeless kids and offer them a much-needed place to live, welcoming them both into their motley family, which includes bartender Lou (Harrison White), emcee Arnie (Ezra Buzzington) and stripper Lydia (Lowe Taylor).

Scene-stealer Cassie Silva, as Cloe’s teenage daughter Crystal, doesn’t appear until the second act. But when she does, Silva makes her initial dance number a showstopper and show choreographer Dana Solimando’s best dance routine.  Silva’s subsequent scenes with Eberline and Schindele really pop as her enthusiasm exudes and overflows off the stage.

The musical’s best songs include Perri’s sexy, fun bump-and-grind “Ya Gotta Have Class,” Taylor’s simple and plaintive “How About Me,” Buzzington’s revealing “No More Polyester,” and Schindele’s romantic and aching “Forever on My Mind.”

Others with vocal talents/ranges worth watching for include both actors who played Norton (Harris as the younger and Matthew Patrick Davis as the adult).

Eberline’s strong vocals were overpowered by the orchestrations and the unsympathetic nature of her character Cloe.

The mish-mash of acting styles, with the two Pachagalope sons (Jim Holdridge and Benjamin Goldsmith) played as slapstick to everyone else in the cast playing straight, matches the mish-mash of the uneven script’s logic. If “magic” equals or can replace logic, this show will work for you. For example: (Spoiler alert!) Young boy’s crush on stripper blooms into full romance when the boy becomes an adult. Emcee (channelling Christopher Lloyd) gone missing reappears a new man with no explanation. Man finds out he has a 17-year-old daughter and his negative reaction is handled in a few throwaway sentences and then continues on to a happy ending.

The costuming by Kate Bergh of the formfitting dresses on the very fit Eberline and sinfully curvaceous Perri seem more 2011 than 1997.