‘Stones in His Pockets’ at the Zephyr Theatre 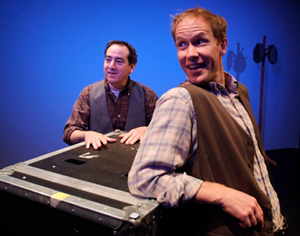 Andrew Friedman and Jerry Richardson star in ‘Stones in His Pockets’ at the Zephyr Theatre. / Photo by Suki Medencevic

“Stones” takes place in modern-day County Kerry, Ireland, where a Hollywood film production takes over the village providing the locals 40 quid a day as movie extras. With the elusive Hollywood dream right at their front doorsteps, the locals have to deal with the pressing issues of scraping together a living, despair, suicides, and Irish camaraderie.

Andrew Friedman and Jerry Richardson play the main extras, Charlie and Jake, respectively, as well as various townsfolk and members of the film crew (both male and female).

“Stones” couldn’t be successful in communicating the various range of emotions with any cast of two any less talented than Friedman and Richardson. Friedman and Richardson play off each other so effortlessly, so perfectly in sync; you feel like you’re watching/listening to a fine-tuned, two-man symphony. Their many characters change onstage in seconds from one to another with a simple delineation of a shoulder slump or a hand on a hip; with only a kerchief as the characters’ main prop to become recognizable and distinct from each character. Occasional flubbed lines and dropped Irish accents can be excused, the two actors engross the audience so.

Zeljko Djukic directs this 105-minute production in a fast, smooth pace giving just enough time for the punch lines to register and for the serious ones to zero in deep.

This tricky stage device of having a pair of actors play multiple roles can easily backfire if the balance and chemistry of talent, both onstage and off, are not well matched.  Fortunately, for the “Stones” audience, all are definitively aligned here.