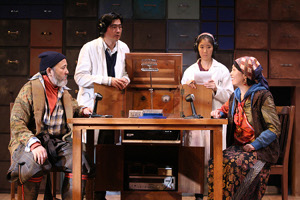 Veteran scene-stealers Nelson Mashita and Jeanne Sakata command the stage for every scene they’re in for the Los Angeles premiere of Julia Cho’s “The Language Archive” currently at East West Players.

The story centers on George, a linguist who masters quite a number of languages, except the one language vital to keep his wife Mary from leaving him. As Ryan Yu portrays him, the single-minded George focuses all his attentions on preserving languages on the edge of extinction, with no time for niceties or showing interest in or affection for his wife Mary, sympathetically played by Kimiko Gelman.  As a matter of fact, the only excitement the deadpan George displays involves his current project — interviewing an older couple who speak a dying language. This delightful couple wonderfully essayed by Mashita and Sakata have and make the most fun on stage as they expressively bicker and needle one another while obviously still very much in love with each other. Mashita and Sakata both also effectively play and entertain in their other multiple minor roles.

As George’s assistant Emma, Jennifer Chang has her moments to shine — basking in her unrequited love for George and performing her ultimate deed of true love.

Set designer Francois-Pierre Couture must be applauded for his gorgeous set consisting solely (at first glance) of stacked multi-colored boxes of varying sizes.  Hidden behind different boxes can be bookshelves, a kitchen countertop, a sliding bookcase, a rolling case for recording instruments, a front door to a bakery, and bureau drawers. The brilliant piece of set versatility hints at an apartment, a work archive, a bakery, and a train station.

Performances continue through Dec. 4. Show times are Wednesday through Saturday at 8 p.m., and Sunday at 2 p.m. David Henry Hwang Theatre at the Union Center for the Arts, 120 Judge John Aiso St., LA 90012. For reservations, call (213) 625-7000 or visit www.eastwestplayers.org.