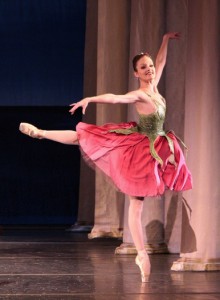 The ballet opens on sumptuous storybook sets designed by LA artist Catherine Kanner. As a festive Christmas party gets underway at the Steinbaum house, young Clara – danced by Mia Katz – and her friends play with their favorite dolls. New to the role last year, Katz shows a deepening dramatic and technical artistry. Clara’s bratty brother, Franz, is played with devilish glee by Aidan Merchel-Zoric.

Sweeping into the party, the children’s Uncle Drosselmeyer brings mechanical dancing dolls to entertain the guests. Revealing himself as a fine dramatic dancer in last season’s Sonya Tayeh world premiere, the charismatic Nicolas de la Vega commands the stage in his first performances as the wizardly uncle.

The midnight battle between the brave toy soldiers and menacing mice is delightful, led by Zheng Hua Li as the high-leaping, hilarious Mouse King. As ever, the women’s corps de ballet presents a breathtaking Dance of the Snowflakes to end Act I.

Act II begins in the Palace of the Dolls, all brought to life by magical Uncle Drosselmeyer. Allyssa Bross and Christopher Revels made auspicious LAB debuts as presiding dolls Marie and her Cavalier in last season’s “Nutcracker.” In the short year since – which included their partnering in both “Giselle” and Balanchine’s “Raymonda Variations” – Bross has developed a confident insouciance to go along with her perfect technique and superb balance, flirting shamelessly with her adoring audience during the fiendish variations of a long and arduous Pas de Deux.

One year ago, Revels made an indelible impression with his ebullient, sky-high leaps and enormous strength and stamina. Now only 20 years old, he exhibits an authority and refinement rare in so young a premier danseur. The fortuitous partnership between these two young artists, carefully and wisely mentored by Christensen and Neary, brings out the best in both of them. Newly named company principals, they exude considerable star quality, which has created a national flurry of anticipation for their pairing in LAB’s upcoming “Swan Lake.” In alternate performances, the Cavalier is danced by returning guest artist Kenta Shimizu, who has parlayed his spectacular jumps, turns, and enormous lifts into a blossoming international career.

Always enchanting, the Waltz of the Flowers is especially striking with Allynne Noelle as The Rose. Her strong debut as Queen of the Wilis in last season’s “Giselle” marked her as a brilliant addition to LAB’s impressive roster of soloists. This season Noelle and Bross share performances as Marie and The Rose.

The children’s corps de ballet offers disciplined and precise step-work, and a rollicking sense of fun throughout the evening – no doubt inspiring the throng of young audience members, who can be seen whirling and leaping through the lobby after the show.

For five years, LAB has presented every one of its productions in at least three locations. A recipient of large grants from LA County Arts Commission and the Schubert Foundation, the company has announced two additional performance venues – in Long Beach and Northridge – for its production of “Swan Lake” in March.