‘This’ at the Kirk Douglas Theatre 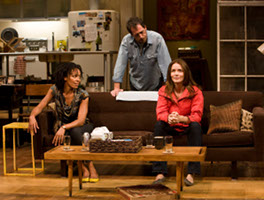 “This,” the latest, witty effort by Obie Award-winning playwright Melissa James Gibson, benefits from the considerable contributions of a talented ensemble led by the phenomenal Saffron Burrows, complemented by a stunning set created by Obie and Hewes Awards-winning scenic designer Louisa Thompson.

“This” tells the story of four friends approaching middle age, dealing with grown-up life issues, such as a new baby, a dead husband, infidelity, and a rudderless career.

When the audience enters the Kirk Douglas stage, the very detailed set of new parents Marrell and Tom’s apartment visually astounds. This intricate set with overflowing bookshelves and baby grand piano upstage left, a full kitchen upstage right, and a complete lived-in, toy-scattered living room downstage becomes smoothly transformed into Jane’s apartment hallway, a jazz club where Marrell sings, and an urban bus stop —all with a simple slide of a rolling screen, a sheet of fabric, or movement of furniture; and a change of spotlighting.

The play opens with a game that Tom initiates with their dinner guests. This game has Jane (Burrows) reluctantly guessing what story the others have made up. To solve this story, Jane can only ask yes or no questions. Although the game itself is involving (Answer “yes” to any questions ending with a consonant; “no” to any question ending with a vowel; and “maybe” to any questions ending in a “y”), the setup is not involving. I couldn’t tell if the long uncomfortable pauses were intentional or just bad pacing. Some very funny one-liners (i.e., Riffs on bjorn (baby carrier) and Brita (water filter)) frequently do sprinkle the uneven script (but too many minutes were spent on a rude cellphone conversation solely in French).

All the actors more than capably convey their characters’ variety of emotions. Eisa Davis portrays Marrell, the jazz chanteuse (with a beautiful voice!), new mother and unhappy/unsatisfied wife of Tom in such a picky and nagging manner one can easily understand or excuse Tom’s wandering eye. Darren Pettie plays Tom, the new father, loving(?) husband of Marrell, and “good” friend of Jane with equal doses of hesitancy, love, and longing. Glenn Fitzgerald as Alan, the irritating gay BBF, strives to find a purpose, or even a career in life, other than being a mnemonist, via a few liquor bottles.  Gilles Marini, with nice comic timing as the lust-inducing, “someone who should be slept with” Jean-Pierre, is underused as he has the least amount of dialogue and spends almost an entire scene center stage sleeping on the couch — and fully clothed, at that! Such an incredible waste of acting talent and hotness for the actor who bared all for “Sex and the City”!

Burrows ably carries the weight of the play as Jane, the just-a-year-ago widowed friend of Marrell, Tom, and Alan.  As Jane struggles to deal with single motherhood after her husband’s death, she becomes the center of all her friends’ universe, whether she wants to be or not. For example, in the opening scene, the whole purpose of the dinner party seems to be Marrell’s transparent efforts to set Jane up with the Doctor Without Borders Jean-Pierre. Burrows’ individual scenes with Davis and Pettie rivet, but her ultimate climactic scenes near the end (there are actually two) vividly expose Jane’s self-doubts, denials, pent-up frustrations, guilt, and realization of her shortcomings.  Be prepared for your heartstrings to be pulled and your tears to flow.

The hour-and-40-minute, intermission-less play directed by Daniel Aukin needs some tightening. The interrogation scene of Alan being interviewed for his talent of total-recall memory interrupts the flow of the show with its disembodied voiceover of God from above and a strong spotlight overhead. Was this supposed to be a guest appearance on a TV interview show or a criminal-suspect interrogation? Also, more lines than should have been were unheard as they were delivered to the stage floor instead of to the audience.