‘Who’s Your Daddy?’ at the Little Victory Theatre 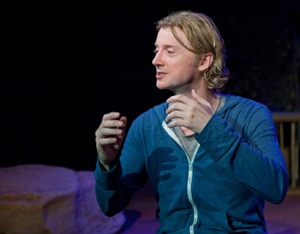 In “Who’s Your Daddy?” at the Little Victory Theatre in Burbank, Johnny O’Callaghan performs his self-written piece documenting his real-life nine-month ordeal in adopting his son Odin from Uganda.

A good storyteller with effective use of his voice, basic gestures and body language, and a very expressive face, O’Callaghan has the audience in the palms of his capable hands as he describes in detail the various trials and tribulations of a single, gay man attempting to adopt.  The joy on his face when he first meets the orphan is easily read and so obviously deeply heartfelt.

Through all the obstacles and hurdles handled, we can empathize with O’Callaghan’s moments of pain and triumph.  So when he finally receives the legal OK to adopt Odin, we all breathe a collective sigh of satisfaction and relief.  Unfortunately, that doesn’t end the adoption process or the play, and the resulting minutes almost seem anti-climactic.

Tom Ormeny directed this 90-minute one-man show, which would benefit from a little shortening, especially after the climactic presentation of the adoption papers.