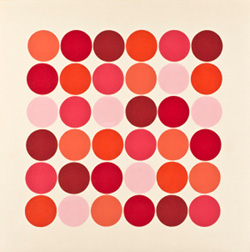 The size of the canvases and the artists’ emphasis on color as an end in itself rather than a means to express emotion give the exhibit a distinct liveliness and impressiveness.

Frank Stella’s “Damascus Gate I” is so large, the Museum had difficulty getting it through the doors, and its magnificent fluorescent hues make it all the more imposing.  Kenneth Noland’s “Par Transit,” basically six bars of varying colors, creates a fascinating optical illusion.  Thomas Downing’s “Red-1966” is decoratively attractive but also impressive when one reads that Downing drew all those circles freehand.

Among the many programs free with admission is a lecture on Saturday, April 9, at 4 p.m. called “What You See Is What You See.” Given by Alison de Lima Greene, curator of contemporary art and special projects at the Museum of Fine Arts in Houston, the lecture takes its title from a famous Stella quote. There are also hands-on arts classes for adults. The Museum offers free admission the first Friday of every month form 6 to 9 p.m.