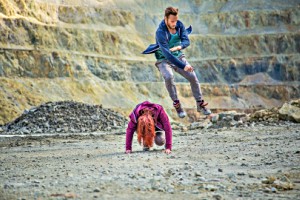 In its 17th year running, the Dance Camera West Film Festival makes its mark on the West Side this Thursday through Sunday, April 12 to 15. Partnering with Jacob Jonas The Company to present “To the Sea: Dance Concerts on the Pier,” the screenings and live performances take place at the Fowler Museum, Laemmle Film Center in Santa Monica and on the pier in that city as well.

The festival includes an evening of international short films that explore the myriad ways dance and film can intersect, documentary profiles of world-renowned movement artists and live outdoor performances from local and national dancers and dance companies. The mission of the festival is to showcase high-quality modern, post-modern, world, tap, dance theater, ballet, hip-hop and all styles that have been captured on film.

The al fresco performances — surrounded by the Pacific Ocean, the Santa Monica Pier and the setting sun — include artists such as the Seaweed Sisters, the ever-inventive Pilobolus, Emily Kikta of New York City Ballet and the Los Angeles Contemporary Dance Company, among others.

Briefly, the schedule is:

Thursday, April 12, at the Fowler Museum

3 p.m.  “Ingmar Bergman Through the Choreographer’s Eye” by Fredrik Stattin and “22:22” by Charlotte Ginsborg

“Concerts By the Sea” are free, but RSVP required: