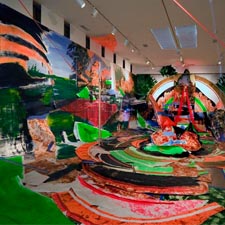 Have you ever walked in a painting? Sounds cool, doesn’t it? At the Pasadena Museum of California Art, you can literally walk into and around Annie Lapin’s “Parallel Deliria Iteration,” an installation that she describes as “a never-ending painting in three dimensions.” Let’s just say that right now the museum’s Project Room looks like an artist’s studio exploded. Lapin used new material and remnants from previous installations and her own studio to fill the PMCA’s Project Room with an artistic expression free of the usual constraints of canvas or frame – or anything else. Step in and let your imagination wander.

“Parallel Deliria Iteration” and three other new exhibitions are up through Sept. 20 at the PMCA. The main gallery has “You See: The Early Years of the UC Davis Faculty” and a related ceramic exhibit, “Edith Heath: Tabletop Modernist.” The back gallery features Benny Chan’s “Traffic” photographs.

“You See” features work by Robert Arneson, Roy De Forest, Manuel Neri, Wayne Thiebaud and William T. Wiley. These five artists arrived at UC Davis between 1960 and 1965 and were instrumental in creating the California funk art movement, characterized by humor, bawdiness, and irreverence. On view are 36 works, including three important works by Thiebaud and an enormous ceramic piece by Arneson created in homage to his ’50s-era tract home. 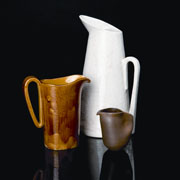 Ceramics were big in the funk movement, so perhaps playing off that theme and the notion of artistic innovation, the PMCA presents the first retrospective of Edith Heath’s (1911-2005) work. Heath Ceramics, a pottery she founded in 1948 in Sausalito, is still going strong there and opened a store/gallery on Beverly Boulevard in LA. Heath helped define mid-century modernism with her ability to turn something like a handmade pitcher into an objet d’art, and her work is in the collections of museums such as New York’s MOMA. She also manufactured tile and, in addition to working with architects like Frank Lloyd Wright, created the tile exterior of the Norton Simon Museum with the firm of Ladd and Kelsey.

Finally, “Traffic” explores an unavoidable fact of life for Angelenos. Architectural photographer Benny Chan’s aerial photos of rush-hour traffic on LA freeways were taken in planes and helicopters with a 16 lb. camera he built for the project. His 62 inch-by-84 inch photos may prompt you to ask something that has certainly crossed my mind while idling on the 405 or 101: Will there come a time when the traffic will completely stop moving? Chan has expressed the severity of the problem this way: “Traffic jams in a megalopolis the size of Los Angeles are a function of our enormous population growth…. Our reluctance to take action sooner underscores our complacency, procrastination, and greed.”