A Farewell of Poignant Beauty: Mahler’s Ninth Symphony With the LA Phil and Gustavo Dudamel 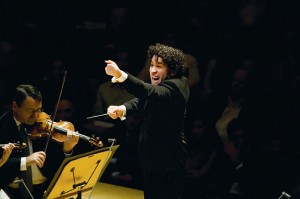 Gustavo Dudamel brings the Mahler Project to a close this weekend. / Photo courtesy of LA Phil

All good things must come to an end, and Gustavo Dudamel’s epic exploration of Mahler’s symphonies with the LA Phil and the Simón Bolívar Symphony Orchestra of Venezuela — his hometown orchestra — is no exception.  The Los Angeles part of the Mahler project ends this Sunday, Feb. 5, with a performance of Mahler’s Ninth Symphony, and it is perhaps fitting that Dudamel ends this intense and heartfelt musical journey with a work replete with parting sorrow.  (After this performance, the two orchestras will travel to Venezuela for a performance of Mahler’s Eighth Symphony, an event that will be broadcast live in the United States.)

Mahler wrote his Ninth Symphony a year before his death and, perhaps aware that his end was near, infused it with gestures of farewell and an air of sadness.  In last night’s performance, Dudamel and the LA Phil captured the poignancy of this work beautifully.  Handling the technical demands of this work with ease, they delivered a performance that was both intensely focused and deeply moving.

The first movement of the symphony presents a conflict between a tender but sad theme in D major and a violent and more dissonant theme that sometimes borderlines on atonality.  The movement fluctuates between tenderness and violence, with tenderness prevailing as the end approaches.  Dudamel and the orchestra highlighted these sharp contrasts vividly, with warm string solos on one hand and the halting sound of muted brass on the other.  The ending of the movement was particularly heart-stopping, with the tender theme seemingly coming to a standstill before getting resolved — but only tentatively — by a single high note on the piccolo.

The second movement’s main theme takes the form of a landler, a German folk dance.  Dudamel and the orchestra brought out the humor in this innocent folk theme nicely, with heavily accented strings evoking a peasant’s heavy footsteps and the uneven rhythms evoking his clumsy gait.  In this performance, this movement provided momentary rest — and perhaps even comic relief — from the emotional intensity of the outer movements.

Following the somewhat frivolous ending of the second movement, the music plunges immediately into the terrifying third movement.  Here, the music proceeds relentlessly, with dissonant chords and fragmented motifs.  For this performance, Dudamel adopted a more measured approach, choosing a tempo that was somewhat slower compared to some other performances.  Nonetheless, the rhythmic drive persisted throughout the piece, and the slower tempo allowed the accelerando at the end to be pushed to its frightening limits.

The fourth movement, unusual for final symphonic movements with its adagio tempo marking, provides a catharsis to the violence and dissonance in the earlier movements.  Central to this movement is a three-note falling motif — a possible  reference to the opening theme of Beethoven’s “Les Adieux” Sonata — which is played first by the strings, and later by the horns; in last night’s performance, both sections rendered this “farewell” motif with a glowing warmth.  The principal violist’s solo was especially haunting, and she played it with a beautiful penetrating tone that may be unfamiliar to many concertgoers, due to the scarcity of viola solos in the symphonic literature.  The music slows and softens progressively towards the end, finishing with a long and barely audible chord on the strings.  It was stunning to hear these hushed final chords at Disney Hall, where even the faintest of sounds project with crystal clarity.  (Unfortunately, the sublimity of these final chords was broken by intermittent coughing from the audience, though, mercifully, no cell phones went off at this time.)

Throughout the performance, I was struck by the complete control that Dudamel had of the orchestra.  Conducting from memory, Dudamel seemed completely at ease on the podium, and the orchestra seemed to respond with great sensitivity to his every subtle movement and gesture.  I have seen Dudamel conduct the LA Phil a number of times, but this was the first when I felt that conductor and orchestra were in perfect synchrony with each other.  Perhaps Dudamel has finally called LA home.

Kueh is a music lover and pianist who plays mainly classical, but also likes to dabble in jazz.  He is also a cell biologist.  He enjoys attending concerts at Disney Hall, and likes to unwind in front of the piano after a long day at work.