A Hendrix Tribute at Fender 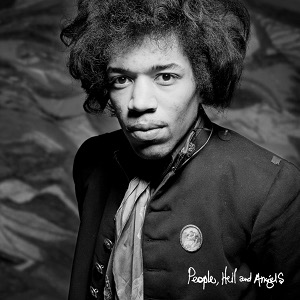 I barely noticed the old man with thinning hair and glasses standing next to me as the introductions got underway at the kickoff of the new Jimi Hendrix exhibit at the Fender factory in Corona. He was dressed in blue jeans, dirty tennis shoes and a beige nylon jacket; the only thing unusual was his rather up-class British accent that I noted as we exchanged a few pleasantries while waiting for the program to begin. Introduced and brought up on stage were Billy Cox, bassist for Hendrix’s group Band of Gypsies; Hendrix producer and engineer Eddie Kramer; and Janie Hendrix, Jimi’s younger sister. The announcer said he’d like to acknowledge a few special guests and suddenly the spotlight was on the old man — “Please welcome the legendary Spencer Davis!” The old man sheepishly grinned and waved to the crowd. Wow. This was going to be an interesting night.

The opening party for the Hendrix exhibit took place on March 2 in Fender’s glossy new showroom/merchandising space, which opened last year and serves, along with their newish factory tour program, as a deft marketing tool for the guitar and amplifier company. The walls are covered with dozens of guitars next to posters of the music stars who have played them. There is a custom-build room that smells of raw wood and lacquer, and a jam room, where anyone can play a dizzying array of combinations of Fender’s guitars and amplifiers. A large selection of branded accessories — T-shirts, hats and the like — are offered for sale by the front.

But this night, the focus was on the man who nearly singlehandedly saved Fender from extinction. Before Hendrix came along, Fender’s solid-body guitars were used primarily by country and western musicians who appreciated its twangy sound. But then Hendrix exploded onto the scene in 1966, coaxing astonishing sounds never heard before out of his left-handed white Stratocaster. When Hendrix set his guitar on fire at the Monterey Pop Festival, it was an iconic moment for a generation, forever searing that guitar into youth’s collective memory. Sales of Fender guitars took off and have been climbing ever since.

At the event, Janie Hendrix (sporting an awesome custom-made purse in the shape of a white Stratocaster) spoke of how their father was a strict disciplinarian who imparted his work ethic to his children. Cox, the only remaining living member of any of Hendrix’s major bands, explained how Hendrix formed Band of Gypsies because he was seeking to explore a bluesier idiom than he had with his former band The Experience. Kramer, for his part, told of how Hendrix spent nearly all his free time in the studio, recording and exploring new sounds. According to Kramer, “The best way I can describe Jimi’s playing is that the Holy Spirit entered into his brain, flowed through his body and erupted out his fingers.”

The highlight of the evening was an impromptu jam that featured Cox (playing a Fender bass that moments before had been presented to him by Fender as a gift), a San Diego-based drummer who impressively improvised with paintbrush handles when no sticks could be found, and a barely pubescent 12-year-old guitarist named Ray Goren, who has apparently been making somewhat of a splash in Southern California with his incendiary blues-based shredding. They played Hendrix’s own “Red House,” allowing the young virtuoso full scope to showcase his impressive and still-developing talents. I recorded most of the performance on my cell phone and uploaded it to YouTube. With advance apologies for my shortcomings as a videographer, you can have a look here.

If you decide to go and see the Hendrix exhibit for yourself, don’t expect to be overwhelmed. Apart from some of Kramer’s in-studio photography and a few Hendrix posters on one area of wall space, there are a few bits of Hendrix memorabilia — a guitar, a couple pieces of clothing — not much more than you would expect to see at a Hard Rock Café. Go for the factory tour, and enjoy the opportunity afterward to pick up a guitar, plug in and find your own inner Hendrix.

The Jimi Hendrix exhibit at the Fender Visitor Center continues through May 31. The first artist exhibit at Fender, it coincides with the new Legacy Recordings release of Jimi Hendrix’s “People, Hell and Angels,” a collection of re-mastered and previously unreleased studio recordings. Fender Visitor Center, 301 Cessna Circle, Corona 92880. For more information, visit http://www.fender.com/visitor-center/.