A Play With Good DNA 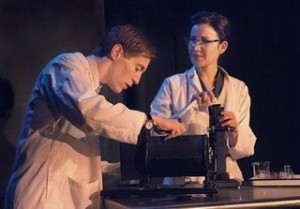 James Watson and Francis Crick received the Nobel Prize for their model of DNA, but biophysicist Rosalind Franklin, whose research (specifically the X-ray diffraction image that gives this play its name) aided that scientific breakthrough, died in relative obscurity. It sounds like the stuff of good drama, and indeed it is in Anna Ziegler’s “Photograph 51.” Simon Levy directs and Aria Alpert (daughter of Herb Alpert and Lani Hall) stars in the West Coast premiere, which continues at the Fountain Theatre through May 3.

The Fountain Theatre itself is no stranger to prestigious awards. It has won more than 160 for theater excellence, including every major theater award in Los Angeles.