A ‘Ring’ to Make Wagner Proud 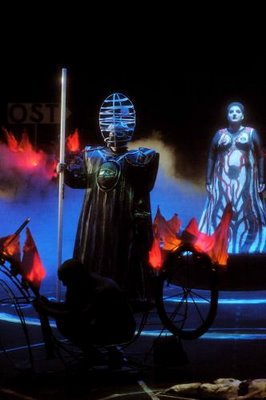 LA Opera’s production of “Die Walküre” is a creative, invigorating and altogether splendid realization of Richard Wagner’s idea of a gesamtkunstwerk, a complete artwork synthesizing music, drama, poetry, painting, sculpture, and architecture. Berlin-based director Achim Freyer has succeeded in giving us a fresh and radical rethinking of Wagner’s 1854 meisterwerk, an overhaul the master himself undoubtedly would have approved of. Make no mistake, with a running time of 4 hours and 50 minutes, sitting through this operatic experience is a commitment — but one that is richly rewarding in numerous ways.

First, the music. This is one of the greatest of the Romantic-era scores, and under conductor James Conlon, who spent nine years leading a Wagner-heavy orchestra in Cologne, the music is communicated with all the passion, drama, and foreboding that Wagner baked in. Although the orchestra has been rendered invisible underneath a black scrim (Wagner’s idea to avoid competing with the drama onstage), the sumptuous music pours forth undiminished with all its moments of power and delicacy intact. The basses and kettle drums carry us into the howling storms, while the brasses continually blat out swells of impending doom. And this is to say nothing of the magnificence of the singers, particularly Plácido Domingo in the role of Siegmund. Having performed this role many times in the past, most notably in New York’s Metropolitan Opera version, Domingo inhabits his character with a natural and seemingly effortless grace. The power and purity of his voice, along with his emotive expression perfectly evokes the tragic hero. Clearly, his Siegmund will be remembered as one of the most memorable roles for one of the most memorable tenors of our era. Other standouts include Linda Watson as Brünnhilde and Vitalij Kowaljow as Wotan. These artists are adept at connecting us to the turbulent emotional currents that form the spine of the drama.

Fortunately, the production is as mesmerizing to watch as to listen to. Freyer not only has stage-directed the production, but is also responsible for the costumes and the lighting. So to a larger extent than is typical, what we see is one man’s artistic vision. Freyer is an accomplished painter (he has a painting represented in the current LACMA show “Art of Two Germanys”) and his astute visual sense comes through in eye-popping fashion. Costumes, puppets, even faces are painted in garish, surrealistic designs, adding to the sense of otherworldliness. The characters’ natures are cleverly reflected in the costumes, which appear outlandish, but are fully in keeping with the strange mythical world we have entered. Wotan, for instance, wears a floor length white mantle with giant shoulder pads; his head is represented by, or encased in, a grid of bars somewhat akin to a bishop’s miter, while another head emerges from his stomach.

Characters and images appear as if in a dream — disjointed, isolated, and out of place. Several of the characters have (non-singing) doppelgangers — figures who personify thoughts or moods. There is almost the feeling that you have stumbled into a de Chirico painting. Time and place are indistinguishable and irrelevant here. And this is just how it should be for a drama whose source is myth, an art form where the essential truths exist beyond recognizable ideologies, fashions, or historical periods, removed from the chaotic random events of day-to-day life.

There are a number of technical devices that elevate the production. The entire opera takes place behind a scrim. High-definition digital images — of racing clouds or fire, or even “curtains” opening and closing, are projected on to the scrim at various times. Mostly, the scrim is transparent and does not interfere with clear views of the action onstage. The stage is canted at a sharp angle, the back higher than the front. The action takes place on, next to, and above a large circle, which sometimes turns, and at other times is manipulated into abstract symbols suggesting a millstone or a clock. At one point, the wheel becomes a one-Ring circus for an astonishing parade of fantastical dwarves, harlots, babies, giants, animals, and Gods. The ending, in which the horses of the Valkyries transform into a circle of blazing fire that surrounds the accursed Brünnhilde, is another technical as well as emotional high point.

Obviously, strict traditionalists who are annoyed to see Brünnhilde appearing in anything except a horned Viking helmet will be disappointed in this production. But for those who appreciate fresh thinking, arresting visions, and a new way forward for opera, Freyer’s “Die Walküre” is cause for great enthusiasm. This quasi-surrealist approach to Wagner, so true to the spirit of the gesamtkunstwerk, is running “Rings” around the traditional.

The LA Opera introduced the first of its Freyer-produced Ring operas, “Das Rheingold,” in February. “Die Walkure,” the second in the series, continues through April 25. It will be followed by the final two operas, “Siegfried” and “Götterdämmerung,” in the 2010 season, with the opportunity to see all four staged within a 10-day window in June 2010.

David Maurer is a former Senior Editor for Classic Home magazine and writes about the arts and architecture for a variety of print and online outlets.

[Editor’s Note: The author is also a director of a foundation that has, in the past, provided educational grants to LA Opera, unrelated to this production.]