A Traditional and Dazzling ‘Traviata’ 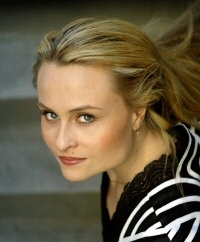 What becomes a legend most? In the case of Marina Poplavskaya, the Russian soprano performing the lead role in LA Opera‘s “La Traviata,” it would seem to be simply her talent plus the right publicist. Two years ago, Poplavskaya was an unknown 29-year-old beginning her first season at London’s Royal Opera House. Just two months ago, Poplavskaya, was not even mentioned in The Times’ (U.K.) list of the world’s top 20 classical divas. Yet, judging by the raves she has garnered in her current role as Violetta, the fickle winds of stardom may have shifted already. For sheer glamour, Poplavskaya does not pose a threat to the world’s reigning diva, Anna Netrebko, but to see her live is to be thrilled by one of the most impressive voices I can ever remember hearing. Judging by the lengthy standing ovation and hoarse choruses of “brava!” after her performance, audiences are thinking along the same lines.

In Italian, la traviata means roughly “the lady who has strayed.” It is, of course, meant to describe the doomed Violetta’s shaky social status as a courtesan, but in a different sense, it is also apt for Poplavskaya, who emerged from a childhood in Moscow she describes as “poor” to sing lead roles in opera productions in Russia. After colleagues urged her to broaden her cultural experience, she decamped to London in 2006 and signed on with the Young Artists Program at the Royal Opera. It took less than a year to transition from there to full-fledged headliner, performing in major roles with various opera companies throughout the U.K. and America.

Perhaps the most astonishing thing about Poplavskaya’s voice is its power. A slim, even petite woman with a hint of Tatar in her high cheekbones, she obviously lacks the stereotypically heroic size of many divas that come to mind. Yet somehow she is able to fill the Dorothy Chandler Pavilion with her voice to the extent that it seems a force of nature. You half expect the bolts holding the seats down to come unscrewed or your watch crystal to crack when she lets loose at full song. It almost seems like showing off when, throughout most of one First Act duet, she completely filled the hall with her voice while facing the rear of the stage. Her coloratura (vocal gymnastics such as trills and staccatti) was superb and lots of fun to listen to, while her acting was natural yet dramatic where appropriate. (Please note: Each of the three major roles in La Traviata are shared through June 21. Poplavskaya is slated to perform only through June 6, after which she will be replaced in the role by Elizabeth Futral.) 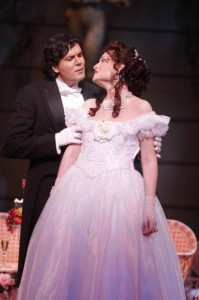 L.A. audiences first saw this production of Verdi’s classic in the 2006-07 season. Marta Domingo (married to LA Opera Director Plácido) directed then and she does the honors once again, wisely resisting messing with a good thing. Perhaps as a sign of the times, management has substituted a relatively unknown cast (presumably costing a good deal less than the earlier production that featured established stars Renée Fleming and Rolando Villazón), and a debut conductor doubling as Chorus Master – L.A. Master Chorale’s Grant Gershon; but I doubt that anyone would feel that they were somehow getting less value for their opera-going dollar. The orchestral performance seems just right; the many waltzes were performed with such effortlessness, I began to wonder if Gershon might have some Viennese in his background. His experience with singing ensembles no doubt elevates the chorus, which performs with particular verve and alacrity. I can’t say if it was a coincidence, but in the performance I saw, the two principal roles were performed by Russians and the next most important role by a Pole. Tenor Alexei Dolgov is convincing, if slightly on the cool side, as the lovelorn Alfredo Germont, and baritone Andrzej Dobber expertly combines tenderness with stern, marmoreal command as Germont père. Also highly entertaining is Timo Nunez as the (non-singing) flamenco dancer Piquillo.

This is a traditional-style “Traviata,” so no need to wonder whether the chorus will appear in togas or stormtrooper chic. The costumes and sets reflect the sumptuous 19th-century aristocratic sensibility Verdi and his librettist were part of, although visually, the time lines do appear a bit crossed: the action supposedly takes place in Paris in 1847, but the women’s dress styles appear to be from the 1870s and the decor from the 1890s. Whatever the exact year, the stilted manners and anachronistic societal approbations the protagonists face seem so tied up with that era, that it just seems right to mount this straight, as written. Interestingly, Domingo has seen fit to push the era a bit further with her direction of yet another production of “La Traviata” now playing in San Francisco, set in the Roaring ’20s and starring, yes – Anna Netrebko. But after seeing L.A.s production, one would be hard-pressed to forego the eye candy of the beautiful gardens and salons and, especially, the crimson supernova of Flora’s soirée in Act Two’s second scene. Even the ominous black bedroom of Act Three, in which Violetta spends the entire scene dying, is a feast for the eyes.

“La Traviata” is one of the bread-and-butter pieces of the operatic repertoire. It’s a bit silly, a bit tragic, and a lot charming. It is a visual and melodic confection that will please experienced opera lovers and dazzle first-timers. When the production respects the original intent, as this one does, the measure of its success is in how well each of the elements surprises beyond expectations. In this case, LA Opera has gotten all its ducks in a row and come up with a crowd pleaser that takes no effort to love.