Alberta Ballet Performs Joni Mitchell’s ‘The Fiddle and the Drum’ 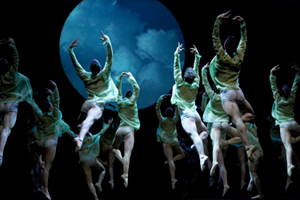 A man steps forward into bright light, and we are confronted with his flesh – tinted the sickly green of camouflage or radioactive glow. Joni Mitchell’s voice rings out a mournful melody: “And so once again … My dear Johnny my dear friend … And so once again you are fightin’ us all….” Dancers emerge like spirits, piling up behind the first soldier, and the body count rises. In Joni Mitchell’s The Fiddle and the Drum, performed by the Alberta Ballet last night (Feb. 25) at the Irvine Barclay Theatre, the intimate and fleshly physicality of live dance speaks in eloquent combination with Mitchell’s music.

Alberta Ballet Artistic Director Jean Grand-Maître, whose work as director of choreography for the Vancouver Olympics has recently brought the company international attention, collaborated with fellow Canadian Joni Mitchell on the creation of Fiddle in 2006 and 2007. Since its completion, the work has been performed throughout Canada and released on DVD, but last night’s sold-out performance marks only the second stop on the ballet’s first United States tour. The tour continues at UCLA’s Royce Hall tonight and Saturday, Feb. 26-27.

The Fiddle and the Drum derives its structure and inspiration from 13 of Mitchell’s songs that play back to back, mostly lesser-known works released in the ’80s and ’90s, and from Mitchell’s glowing green, apocalyptic artwork that appears projected on the scrim. The themes they suggest – warnings that we are hurrying our own destruction by waging war and abusing our planet, lamentations that rail against the exploitation and hypocrisy that facilitate this destruction – are ones that have concerned Mitchell throughout her career. But the rhythmic drive that pushes the action through much of the evening may surprise those expecting the sparser, solo guitar sound of her early work.

Out of the somber stillness of the opening, “Sex Kills” jolts the 29 dancers into sudden action, propelling them into superhuman postures with mechanical speed and precision. Here, silvery overhead light gilds the sharp edges of legs and arms as the lethal limbs slash and strike through shadows. As Mitchell sings, “And sex sells everything … sex kills,” we see human physicality as beautiful and dangerous; here we are the instruments of our own destruction.

Tension in the contrasts between songs, and sometimes in the jarring contrast between dark lyrics and bright sound and rhythms, affords opportunities for the dancers to embody the opposing human potentials for creation and destruction, tenderness and aggression, artifice and honesty. When a sensuous, gentle, ecstatic duet follows “Sex Kills,” for example, its deliciously unfurling limbs and curving spines counter that grim vision. And in “The Beat of Black Wings,” the ironic marriage of sickly sweet instrumentation with tragic story finds apt physical expression in the juxtaposition of a shiny-skirted, flag-waving chorus line with three young, fearful soldiers intent on the work of war.

The Fiddle and the Drum sometimes wanders into physical interpretations that seem forced, false, or glib – like the little girl who frolics among the grown-ups and offers a peace sign at the end. But with songs like “Slouching Towards Bethlehem,” Grand-Maître crafts a richly nuanced relationship between the people on stage and the cataclysm we hear approaching in the lyrics and sirens, and that we see in the bombers and skeletal faces of Mitchell’s images.

In this section, a parade of strong, straight legs thrusting out like bayonets seems to confirm the imminent danger, but swinging, leaping, exultant movement bolsters the feeble hope that the lyrics suggest. And moments of exquisite beauty – like the couples rotating in parallel onto an empty stage, women held aloft in a shaft of golden light, turning with the flowing waves of sweet guitar melody – resist the pattern of war with a defiantly peaceful physicality, and remind us of all we stand to lose.

Ticket information for tonight and Saturday’s (Feb. 26-27) performances of The Fiddle and the Drum is available at UCLA live.

Anna Reed is a new contributor to Culture Spot. She has a blog about dance: http://www.danceinla.blogspot.com/.