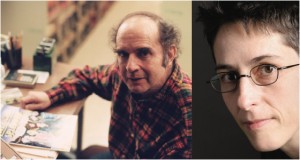 UCLA Live’s “Titans of the Graphic Novel” event brought two highly influential voices of graphic narrative to the same podium on April 23.  The effect was startling and instructive.

Alison Bechdel, author of Fun Home: A Family Tragicomic and the syndicated strip Dykes to Watch Out For, said it best: Words and pictures are, when combined, greater than the sum of their parts.  As she spoke of her life and her background in art, her family, and her work, Bechdel both demonstrated her contemporary relevance and looked to a well-respected colleague, Harvey Pekar.  He followed her presentation with a frank, open monologue to assuage all doubt that Pekar is the Everyman’s comics writer.

Bechdel’s presentation ranged from facts to philosophy.  She read from Fun Home about her late father and displayed excerpts of the book’s images.  When she demonstrated the steps between idea and printed page, the already staggering power of her work increased: text, sketches, ink, and shading in what she laughingly calls “method” comics.  Bechdel’s comics resound even without the potent subject matters of sexuality, family dynamics, politics, and what it means to be as clear as possible and yet hidden in the nuances of self-expression.  Her presentation was as layered as her work, and captured an already smitten audience before referring to the work and influence of Pekar.

American Splendor, Pekar made it clear, was never drawn by him.  (Bechdel had earlier displayed a stick-figure storyboard Pekar once doodled in a diner.)  And yet his stories about the mundane Cleveland life of a medical filing clerk have reached a zenith of cult celebrity.  Among the illustrators fleshing out the text of his work are Bechdel and R. Crumb; in 2003, the film American Splendor created a documentary and biopic out Pekar’s life and work.  Yet perhaps the most appealing and relieving aspect of his low-tech, straightforward storytelling was just that.  It was low-tech and straightforward, as quotidian and relatable as American Splendor itself.

In the words of scholar Hillary Chute, the term “graphic novel” is often “an awkwardly popular misnomer.”  These works are hardly the stuff of fiction.  In a brief Q&A, Bechdel and Pekar spoke of family, next moves, movies (as options, as realities), and, very highly, of each other.  Throughout the night, both authors seemed absolutely and even disarmingly themselves – a feat only more smoothly accomplished by their medium.