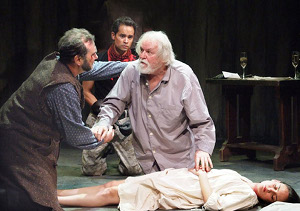 The Antaeus Company, which was founded as a project of the Mark Taper Forum in 1991, is a classical theater ensemble dedicated to keeping “classical theater vibrantly alive in ourselves and in our community” through performance and education. Perhaps surprisingly, “King Lear,” the centerpiece of its fifth biennial ClassicsFest (offering a plethora of workshops and readings through Aug. 15), is the company’s first full Shakespeare production. And considering that it is regarded as Shakespeare’s greatest work, it is a smart choice.

But Antaeus was not content with one production of the masterpiece. Because the company double-casts all of its productions, audiences can enjoy two versions this summer. “The Fools” cast features Dakin Matthews, founding artistic director of the Antaeus Company and award-winning scholar-actor specializing in Shakespearean plays, as Lear; while “The Madmen” cast is led by founding member of the Antaeus Company, Broadway veteran and three-time Tony nominee Harry Groener. All of the actors have extensive theater, film and television credits.

At a recent July performance by “The Fools,” the acting was outstanding. Matthews captured every nuance of the role, alternately raging and whimpering as the King who misguidedly divides his kingdom, disowns the one daughter who truly loves him and descends into madness. Stephen Caffrey was remarkable as the clever and insightful Fool. In fact, all of the players deserve a shout out. When the lights came on for intermission and at the conclusion of the show, audience members were raving about the performances and curious to see the second ensemble.

Shakespeare plays never cease to amaze in the way they transcend time. During the show, there were a few instances when audience members responded quietly with an “ummm” to lines written centuries ago that still strike a chord today. And in the right company’s hands, of course, the audience never gets lost in the language; the superb actors of the Antaeus Company ensured that every line was comprehensible.

Director Bart DeLorenzo, founding artistic director of the Evidence Room in LA, remarked in his director’s note about the relevance of this 17th-century play to our times. “Many productions are opening in the U.S. and around the world this year, and that’s not a coincidence,” he added in a press statement. “Everything is in flux: the economy, health care, the political power structure. When the world is changing, theaters do ‘Lear.’”

The play leaves us with Edgar’s thoughtful words to ponder in our own lives: “The weight of this sad time we must obey,/ Speak what we feel, not what we ought to say:/ The oldest hath borne most; we that are young/ Shall never see so much, nor live so long.”

And the Antaeus Company leaves us with plenty to appreciate about the LA theater scene.