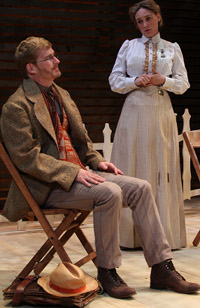 Set in 1893, “Mrs. Warren’s Profession” revolves around the unspeakable career choice of a mother and how her now grown-up daughter must deal with its revelation.

The first act of this two-hour-and-20-minute play moves at a steady, rapid pace with the ensemble (all maintaining very credible British accents) laying out the guarded details of the six characters’ relationships and past. The tempo of the second act gets loaded down with the more serious and inevitable confrontations of the conflicting characters.

In keeping with Antaeus Company tradition, this production is double cast with the possibility of seeing the “Georges” cast, the “Bernards” cast, or the “Shaws” (a combination of Georges and Bernards).

All actors of the “Georges” cast I viewed have their individual moments to shine on stage: The always effective Bill Brochtrup as Mr. Praed, the fussy, artistic confidante of Mrs. Warren; Tony Amendola, ever so slimy as the blunt and oft-putting Sir George Crofts; Ramon de Ocampo as Frank Gardner, the conniving “little boy” pursuer of a woman to support him; John-David Keller as lightweight drinker Rev. Samuel Garner with a past connection with Mrs. Warren.

But, as it should be, the highlights belong to the two mother-daughter scenes (the revealing one in the first act and the confrontational one in the second). Anne Gee Byrd skillfully demonstrates just how her Mrs. Kitty Warren has been such an effective actress in her unmentionable profession, then in a flash drops her “work façade” to reveal her wounded maternal vulnerabilities.  Rebecca Mozo convincingly inhabits her daughter, Vivie Warren, as a strong woman defying the confines of Victorian society constrictions. Mozo brings to mind good comparisons to Kiera Knightley in look and talent.

Production values here are quite on par with larger theatrical venues. Kudos to the appropriate 1893 Victorian costumes by A. Jeffrey Schoenberg and the efficient, effectual set of Francois-Pierre Couture.

De Ocampo gives a modern feel to his Frank Gardner, not at all out of place.  As a matter of fact, with a few tweaks, this 1893 plot could easily be applicable in 2013…  An estranged parent wanting her adult child wedded and comfortably cared for. A charming seducer hunting for a sugar momma or sugar daddy. A priest with some sexual indiscretions in his not-too-distant past attempting to appear moral and righteous.  Yup, Shaw’s classic story is timeless.  Well done, Antaeus Company!