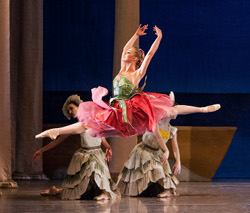 Growing up in a small village near Brisbane, Australia, Bianca Bulle had never entertained the thought of a career in dance. But a conversation with her mentor Rowena Jackson, former prima ballerina of the Royal Ballet at Covent Garden, changed everything, when Jackson convinced the 15-year-old to participate in the international Youth American Grand Prix (YAGP) competition in New York.

The YAGP competition gives international companies a first look at the most promising young dancers from around the world. Major ballet companies recruit dancers very early on. Like scouting the next great college or professional athletes while the candidates are in high school or even younger, artistic directors monitor the progress of young dancers training in the prestigious ballet schools of the world and winning the major dance competitions.

Bulle’s ascendance to finalist at YAGP led to a scholarship to attend the month-long 2009 Summer Intensive at the School of American Ballet — the “farm team” of the legendary New York City Ballet. “I asked her how it would feel to leave Australia, all her friends, everything she had ever known,” says Bulle’s mother, Helen. “She said if she thought about it, she wouldn’t be able to go, and asked me not to mention it.”

At 15, the girl flew alone to New York to dance. Within days, the SAB leadership invited Bulle to stay after the summer session, for daily training throughout the year. “I didn’t know what I would do about school,” she says, “but eventually home-schooled myself via distance education while attending SAB.”

Two years after arriving in New York, Bulle became a finalist in the 2009 Prix de Lausanne competition in Switzerland and was awarded one of the two scholarships to train with the Royal Danish Ballet. Gifted with ideal physical proportions, enormous strength and stamina, and resembling a young Grace Kelly, Bulle got interest from several ballet companies.

Co-Artistic Directors of Los Angles Ballet Thordal Christensen and Colleen Neary became aware of Bulle shortly after the teenager arrived at SAB. “We watched her for three years,” says Christensen.

“A major part of our mission is to identify, nurture and develop talent,” Neary adds. “LAB is relatively young for an internationally recognized ballet company. But we gained this recognition precisely because we have been successful in recognizing and nurturing young dancers like Bianca.”

Upon graduation from SAB, Bulle accepted a contract with Los Angeles Ballet, appearing as both the Sugarplum Fairy (Marie) and the Rose in last year’s “The Nutcracker,” as soloist in the demanding Pas de Trois in “Swan Lake,” and in two of the world-premiere works on LAB’s NextWaveLA program. Bulle returns for the 2012-13 season, which includes two full programs of the Balanchine repertory for which the company is internationally acclaimed.

“Even at her young age, we see several major and leading roles in our upcoming Balanchine repertory as appropriate for Bianca,” says Christensen. “She could certainly dance the title role in ‘La Sonnambula’ and the Principal Woman in ‘Rubies.’”

A former Balanchine ballerina and currently a Balanchine Trust repetiteur, Neary adds, “The Second Theme of ‘Four Temperaments’ is perfect for her, as are principal roles in ‘Concerto Barocco’ and ‘Agon.’”