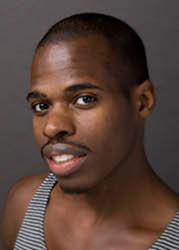 Ballet dancer Christopher McDaniel was raised from birth by his single grandmother in East Harlem when his drug-dependent mother was deemed unfit.  His father was incarcerated during most of McDaniel’s childhood. Though the boy loved to dance, antisocial behavior, belligerence and violence characterized his early years. However, a school field trip to see the Dance Theatre of Harlem changed his life. This first experience with classical ballet moved him to make a deal with his school principal: if McDaniel could behave and pull his grades up, she would contact the dance company and arrange an audition. Within a year, McDaniel had a full scholarship to the Dance Theatre of Harlem School.

“Dance became my safe place, my secret place,” says McDaniel, “a place where I didn’t feel the need to prove how big and bad I was. I credit dance with saving my life.”

His focus and discipline earned positive feedback from the teachers at DTH. McDaniel found he had a talent for remembering choreography, strength and agility beyond that of most of the other young dancers, and a remarkably high jump. After additional training at Ballet Academy East, Boston Ballet and Jacob’s Pillow, McDaniel graduated from high school at age17 (the first of his family to do so) and signed his first professional contract – with the Dance Theatre of Harlem Ensemble.  He began performing immediately on the DTH 40th Anniversary Tour.

“The tour mission was to bring dance to communities that may have never seen ballet before,” says McDaniel. “We were bringing a message of hope and inspiration to damaged youth in those communities, and I felt a personal responsibility to be on that stage. I wanted to inspire someone – one kid – the way I had been inspired. I felt I was representing something much larger than myself.”

Currently finishing a second season with Los Angeles Ballet, McDaniel has performed solo parts in both “The Nutcracker” and “Swan Lake” throughout LA County. He looks forward to working with disadvantaged youth around Southern California as a part of LAB’s Power of Performance! (POP!) program, which brings hundreds of underprivileged children to performances, free of charge, through a network of community partners.

“I know that there is someone out there, in one of those neighborhoods, needing a word of encouragement,” he says. “I received a mandate from my hero, the legendary Arthur Mitchell, at Dance Theatre of Harlem. I’m to live ‘in service to the art form’ – and, to me, that means a commitment to giving back, in any way I can!”

Christopher McDaniel appears with Los Angeles Ballet in “NextWaveLA” – a program of four world premieres by Southern California choreographers Kitty McNamee, Stacey Tookey, Sonya Tayeh and Josie Walsh at Redondo Beach Performing Arts Center on May 12 at 7:30 p.m., at Glendale’s Alex Theatre on May 19 at 7:30 p.m., and at Santa Monica’s Broad Stage on May 26 at 2 and 7:30 p.m. and May 27 at 2 p.m. For tickets and information, visit www.losangelesballet.org.