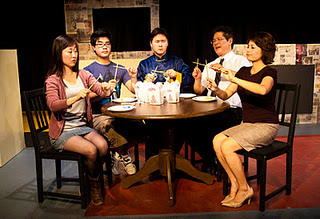 If a playwright has the nerve to use a racial slur for her play’s title, the play better deliver some biting commentary on race relations, either in hysterical parody or heart-wrenching drama.  Lauren Yee’s award-winning “Ching Chong Chinam*n,” currently receiving its LA premiere at The Actors Company, does not come close to either.

The show centers on an Asian family of four. Grace, a frustrated housewife, waits for the results of her pregnancy test.  Her husband Ed doesn’t want to disappoint her and hides the life-changing call from her. Their about-to-turn-18 daughter Desdemona strives to connive her way into being accepted into Princeton. Teenage son Upton has no social skills or friends; his sole interest is video games. In an inspired attempt to avoid his daily chores and schoolwork, Upton brings home a homeless young Asian man, Ching Chong, to order around.

A number of loose plot points, inexplicable character actions, and too many theatrical liberties make the script often seem nonsensical. For instance, why would Grace open up a sealed box not addressed to her, or to anyone in her family? Why does everyone in the family then riffle through the box without it ever being given to its rightful addressee Ching Chong? Ching Chong “hides” the golf club Grace bends in Ed’s golf bag, which Ed plays from the next day – with no dramatic or comedic payoff. Supposedly loved son Upton gets ignored by all members of his family when he announces he’s won/earned a trip to Korea.

However, there were some very committed, entertaining performances from this ensemble of six. Co-producer Julia Cho dominates her scenes as Desdemona. Her Valley Girl-ish “It’s all about me” attitude never gets tiring. Elizabeth Ho effectively and distinctly morphs into her multiple roles (mother, squealing teenager, phone-sex worker, doctor, woman from a previous century), adding needed bursts of energy each time she enters the stage.  Scott Keiji Takeda provides the perfect teenage angst as Upton as he goes all out to achieve video game domination.  Steve Hu makes his presence felt in the title role of Ching Chong, basically a non-speaking part (he just nods).  Even more interesting, when he finally does speak, he converses in English, and he can tap dance. Helen H. Ota and Ken Narasaki play the parents of Desdemona and Upton.

Performances continue through Nov.  27. Show times are Fridays and Saturdays at 8 p.m., and Sundays at 3 p.m. The Actors Company, 916A Formosa Ave., LA 90046. Tickets may be purchased at the box office one hour prior to curtain or online at http://bit.ly/AAPCCC.