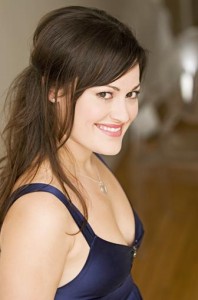 Ashley Brown has the title role in “Mary Poppins,” the award-winning Broadway musical which plays at the Ahmanson Theatre through Feb. 7. Dana Feldman interviewed Brown for Culture Spot LA.

Growing up in the small town of Gulf Breeze, Fla., Ashley Brown never thought that she would end up where she is today. At the age of 6, she sang in a choir, and in high school she was taking voice lessons from Deborah Ross, a teacher and mentor who advised her to enter classical voice competitions.  She wondered if she had a special talent.  Soon she was to learn that she was on the right path when she started to win those competitions.

The summers of her junior and senior years of high school were spent in Tampa, where she attended a three-week program called Broadway Theatre Project.  The classes included singing, acting and dance and began at 10 a.m. and went until 6 p.m.  Each evening the students would prepare for a show that would be performed for all of their families.  Rehearsals were from 7 to 11 nightly. Some of her instructors included such legends as Gregory Hines, Gwen Verdon (former wife of Bob Fosse), and Anne Reinking. The program was intense, but Brown says, “I loved it! I was truly in heaven.”

Not sure where to go for college, Brown consulted with Dave Clemmons, a casting director from New York.  He told her that she should audition for the University of Cincinnati College-Conservatory of Music (CCM). She took his advice and auditioned.  She was accepted, earned her BFA in musical theater, and was on her way to fulfilling a dream that she once thought impossible.

One week after college, she got her first job with Disney and was off on tour with “On the Record.” She says of her first gig, “I only got the part because my character was described as very nervous and inexperienced, and that was me then.”

She would go on to audition for the title role of Belle in “Beauty and the Beast” on Broadway. “I completely bombed!” she says of the audition. “I mean it was horrible!”  But the powers that be saw something special in Brown, because they decided to bring her back a few weeks later. That time she landed the role and made her Broadway debut.

After that, she auditioned nine times for the role of a lifetime on Broadway, Mary Poppins. She went to callback after callback until she got it. She spent two years in the role on Broadway before the tour came to the West Coast.

“Mary Poppins” is playing in Los Angeles at the Ahmanson Theater through Feb. 7. It is a spectacular show filled with breathtaking dance numbers, and the music will lift your spirits.  Brown flies over the audience, and the feeling is overwhelming when she passes overhead.  Of this she says, “It is a wonderful experience.  I get to see the faces of the audience for the first time and it is amazing.”

Only in her twenties, Brown has accomplished a great deal. Her debut solo CD was released nationwide by Ghostlight Records and Sony Distribution in January and is also on iTunes. The album is sexy and passionate and can be described as jazz mixed with Broadway standards. Emmy Award-winning conductor, pianist, composer and arranger Lee Musiker; world-renowned keyboardist, arranger and composer Yaron Gershovsky; and Grammy nominated Sony Masterworks producer David Lai helped bring the album to life.

Dana Feldman: The show is about three hours and it is full of dialogue, singing and dancing.  Can you please tell me how you prepare for the role of Mary Poppins?

Ashley Brown: We had five weeks of rehearsal and three weeks of technical preparation.  I have a visual memory, so when we add movement to the work, it is easier for me to memorize.

DF: Do you have any aspirations with your acting to get into television and film?

AB: Yes, this is something that I have wanted to do.  I am done in February with the show, and I am planning on staying in Los Angeles so that I can take acting classes here.  I will see what happens during pilot season.

DF: Tell me about your debut solo album, “Speak Low.”

AB: I loved making this album.  It is a collection of American songbook standards and includes several of my favorites including “Smile,” “My Funny Valentine” and “I’ll Be Seeing You.”

DF: Is there anything that you have yet to do in your career that you hope to someday accomplish?

AB: I would love the opportunity to do voices in animated films and I want to record more CDs.  I felt so at home making my first CD, “Speak Low,” and want to keep making music – jazz, classical and much more.

DF: What advice do you have for a young performer out there with aspirations such as yours?

AB: Really love what you do and work really hard, even when you don’t feel like it and are frustrated.  You have to make sacrifices as well, but it will pay off. You choose this road.  My other piece of advice: Never, ever change who you are – even when you walk into a room and get rejected.  Don’t morph into who you think people will like because there will be someone out there who likes you and what you do.

It is clear as you watch her perform, that Brown truly loves what she does. You can see her perform as Mary Poppins at the Ahmanson through Feb. 7; visit www.centertheatregroup.org. Learn more about her at www.ashleybrownonline.com.

Dana Feldman is a freelance writer living in Los Angeles.  She interviews actors, comedians, musicians and film directors.  She has a page with the Examiner where she writes for the LA Arts & Entertainment section, and this is her first article for Culture Spot LA.