At the Film Festival 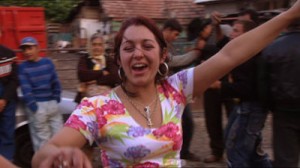 With each passing day, the Los Angeles Film Festival grows more exciting. In Westwood Village, Broxton Avenue was closed in order to accommodate a makeshift theater complete with a Michelin Man-like portable movie screen and a pretty good sound system. Friday’s feature? “Ghostbusters.” It’s a rare weekend indeed when I get to see a film every day, and my choice of film was better and better each day.

The best of them was “We Live In Public” (June 24, 9:30 p.m.). Already the winner of the Grand Jury Prize at Sundance, the film introduces us to Josh Harris, the biggest Internet pioneer we’ve never heard of. “Lions and tigers used to be kings of the jungle and then one day they wound up in zoos,” Harris says. “I suspect we’re on the same track.” Some call him a visionary. He calls himself a visionary. Let’s hope he’s not all that.

The film is all that. Fast paced, even frantic, the timing reflects the dotcom age. Images, sounds, facts, and commentary hit us all at once, yet the film is never muddled. Director Ondi Timoner and Editor Joshua Altman slogged through thousands of hours of footage to piece together a portrait of a man obsessed with streaming video, an obsession born when the rest of us were buying our first answering machine. He dreamed of streaming the world, capturing it in real time, and opening it to all who cared to watch. And so he did.

Across town at the Westside Pavilion’s Landmark Theater, I was lucky to catch a film that takes place on the other side of the world. “Carmen Meets Borat” (June 23, 2 p.m.)  is about a 17-year-old Romanian girl who, like Josh Harris, had a dream. Documentarian Mercedes Stalenhoef brings us to the village of Glod, where we meet Ionela. Her middle name is Carmen, which she prefers to her common first name. She dreams of living the glamorous life she sees depicted in the Spanish soap operas, a world with passionate romances – and indoor plumbing. The title of the film comes from the fact that portions of Sacha Baron Cohen’s “Borat” were filmed in Glod.

Ionela doesn’t get out of Glod, but Harris gets to realize his dreams. More Warhol than Gates, Harris took the millions he made as the founder of Jupiter Communications and Pseudo.com and in 1999 created a pod community underneath New York City. Part social experiment, part underground artist colony, part never-ending party, the structure of that world – far from the peace and love themes prevalent in other sustainable communities – was no structure at all. Do whatever. Go wherever.  And constantly be filmed. However, as Prince, himself a visionary, foretold: Parties weren’t meant to last. On Jan. 1, 2000, Rudolph Giuliani’s strong men closed the enclave down. By 10 a.m., everybody was out. Harris didn’t object. He was tired of that experience, and he probably had a new one in mind.

Harris was about to turn the cameras on himself. In an unexpected but perfectly dramatic twist, the kind of real life twist that would get a screenwriter fired for being trite, Harris would soon lose it all.

Ionela is a bit of a visionary. She said that if money came to Glod and the town got a computer center, she wouldn’t want to leave. She lived a genuine life while holding on to her dream. She giggled with her girlfriends, she argued with her parents, she survived a broken heart. She didn’t leave her village; instead, she stayed where she was stuck, where she was loved.

The last shot of Ionela shows her smiling, a genuine smile. So Ionela’s dream dies, but she goes on living.