Ate9 Dance at the Wallis 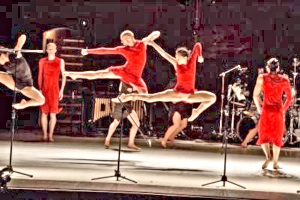 On the local contemporary dance scene since 2013 and now touring across the country, the Ate9 Dance Company premieres its newest work, “a blind LAdy” in the Bram Goldsmith Theater at the Wallis Annenberg Center for the Performing Arts this Friday and Saturday, Feb. 15 and 16, at 7:30 p.m.

Directed and choreographed by Israeli-born Danielle Agami and accompanied by original live music from Spanish indie-pop singer/songwriter Lourdes Hernandez (aka Russian Red), “a blind LAdy” addresses the “insecurities and absurdities of living and working in LA,” according to promotional materials. Does the artist know something we don’t know? Is she an anthropologist noticing our behavioral patterns, pointing out the eccentricities we all take for granted? That remains to be seen…

The evening also includes a visit to last year’s creation, “calling glenn.” The man named in the title is none other than Glenn Kotche, the percussionist/composer of the alternative rock band Wilco. In this piece, the 10-member company of ferocious movers explores the movement language of Gaga, a form created by Agami, herself and which she teaches across the globe. Gaga finds the root of action from internal sources, as compared with reiterating a choreographer’s motion.

Ate9 has been earning plaudits from critics all around and was awarded first prize in the 2013 and 2014 Annual Choreography Festival at the McCallum Theatre in Palm Desert. Agami was named Dance Magazine’s “Top 25 to Watch in 2015” and has received commissions to make new pieces for companies far and wide.

LOCATION: Bram Goldsmith Theater in the Wallis Annenberg Center for the Performing Arts,