Beautified at the Skylight Theatre 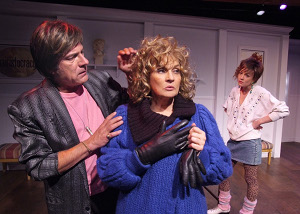 Katselas Theatre Company presents Tony Abatemarco’s latest, “Beautified,” at the Skylight Theatre with mostly stylish results. “Beautified” covers 40 years in a relationship between a hairdresser and his client.

Karen Austin as Candy, Mike the beautician’s best regular client, fascinates with her commanding stage presence and her controlled command of Abatemarco’s clever quips and occasionally deep words. Austin most effectively succeeds in bringing the laughs, the tears, the sympathies — all at their appropriate times.

Clever stage business (switching of phones: corded to Princess to cordless to cell) subtly and amusingly handled by Mike’s assistant Sally (winsomely played by Joanna Strapp) as part of her daily cleaning routine, coupled with the radio broadcast of time-stamping news flashes, hilariously telegraph the specific passage of decades.

Kudos to Allison Leach’s outrageous “period” costuming of Rob Brownstein’s Mike and Sally. Think beaded headbands, gold lame, afros, fur vests and roller skates! The wigs designed by Diane Martinous include some that are very realistic and becoming (Candy’s) and some that are just plain hysterically realistic (Mike and Sally’s).

Austin and Strapp excel in their final scene together. But as good as actors Austin and Brownstein are, their initial scene as their younger 20-year-old selves confuses and doesn’t quite convince. These two characters are supposed to be how young?

And Mike’s “What If I Were Straight?” fantasy dance sequence with Candy (choreographed by Cate Caplin) comes off too staged to be sweet or genuine or spontaneous.

With a running time of almost two hours, either an intermission or, better yet, some judicious trimming by director Jenny Sullivan (even in Candy’s tear-inducing closing monologue) would make for a more perfectly coifed tale of the two friends.

Performances continue through July 1 at the Skylight Theatre, 1816 N. Vermont Ave., LA 90027. Show times are Fridays and Saturdays at 8 p.m., Sundays at 2 p.m. For reservations, call (702) KTC-TKTS or visit www.ktctickets.com.