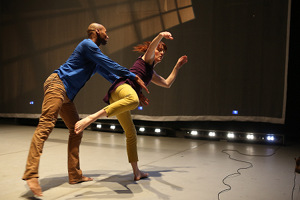 Trapped beneath a table and caught in harsh white light, Darrell Jones strains against the small space. With stops and starts and interruptions, he and dancing partner Angie Hauser have been recounting their experience of performing the Bebe Miller Company’s 2005 work, Landing/Place. Now Jones’ voice grows louder and his words flow faster as he recalls a choreographic idea they “never really got.” Miller conceived of it, they rehearsed it “100 times,” and we see it haunt and possess him now: “a small wild animal trying to crawl out of the space between.” More composed but fully charged, Hauser refuses to give up and asserts, “I can do that.” The tension erupts around, against and on top of the table in a pushing, thrusting struggle that is almost violent and almost erotic, but seems to leave them both more confused than satisfied.

In A History, which had its Los Angeles premiere at REDCAT on April 4, we see how the Bebe Miller Company’s history of collaboration drives potent performance in the present. Part of a larger enterprise to create an archive of the company’s work since 1985, A History focuses on the recent collaboration between Miller, Hauser, Jones and dramaturg Talvin Wilks and brings their creative process to the stage. Foregrounding Hauser and Jones’ experience — their memories, their questions, their desires, their bodies — the work gives profound honor to the Bebe Miller Company dancers and the roles they’ve played in this prolific team and reveals Miller’s tremendous respect and generosity toward her collaborators.

Jones dances first. Spindly limbs fling and shoot, pulling him back onto his heels, buckling his knees and sending him whirling through space with a force that unsettles us — until he stops, laughs and shrugs it off. Having met him, we can know Hauser better. Against his furious flood of movement and easy manner, she is direct, earnest and almost aggressively alert, pausing to observe things we can’t see and consider a way forward. We begin with clarity through contrast, but when the dancers revisit the works they’ve made together with Miller and Wilks — Verge (2001), Landing/Place (2005) and Necessary Beauty (2008) — their identities become complicated, layered and elusive.

They go back into splayed headstands and tripping, falling circles again and again, remembering and examining the past and performing it anew. Eyes squeezed shut, hands gripping headphones in concentration, they relay and interrupt their own experiences or each other’s. Miller and Wilks appear only once or twice in the film by Lily Skove that accompanies the dancers on stage, and while we sense Miller’s vision and shaping hand throughout, A History is the dancers’ world.

Skove’s camera follows Hauser and Jones’ hands as they slide, fold, gesture and roll along the tabletop, and the honesty of their expressivity is striking. But nearby, the dancers remind us of the obvious: with each other and with us, they are performing. When they tell an off-color joke, he assures us, “we’re acting.” And when she wonders aloud whether he’s testing her during a rehearsal, I’m reminded of a snippet of Verge — disturbing in its ambiguity — glimpsed earlier in the evening. Gripping her around the waist, Jones shakes her with such force that her arms flail above her head. He shouts, “Is this OK?,” and we hear Hauser’s strained reply: “It depends on your intention.” In A History, we see these dancers engaged in the treacherous, glorious, baffling work of performing themselves within the web of worlds they’ve created together.

An undertaking like this dance — one in which reflection is the action — runs the risk of becoming too internal, too private to engage an audience. But Hauser and Jones drive the work forward and pull us along by keeping each other in check: cutting off a monologue, sharing a laugh with the audience at the other’s expense, refusing to cooperate with one another’s physical and verbal demands. I’ve read that A History “is designed to invite audiences into what dance-making feels like,”* and I think of this toward the end when I feel a bit claustrophobic. They’re stuck in a studio together, and we’re stuck with them. But we’ve all chosen to be stuck here together, because it’s a privilege and a thrill and we want to see the magic happen.