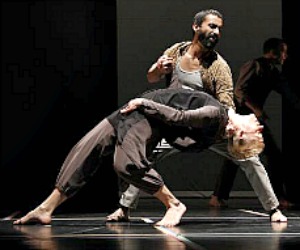 One hundred two years ago, Russian composer Igor Stravinsky premiered his groundbreaking and controversial score to the Sergei Diaghilev’s Ballets Russes performance of choreography by Vaslav Nijinsky, “Le Sacre du Printemps” (Rite of Spring). Since that revolutionary event, the very same aural composition has inspired other artists to interpret the work in a myriad of ways. This Friday and Saturday, March 6 and 7, at 8 p.m., two contemporary, earth-shaking performance makers, choreographer Bill T. Jones (Bill T. Jones/Arnie Zane Dance Company) and theater director Anne Bogart (SITI Company), will unveil their collaborative perspective on the story and soundscape via the Center for the Art of Performance at UCLA’s Royce Hall.

Conceived, directed and choreographed by Bogart, Jones and Janet Wong, their re-imagining is simply titled “A Rite.” The new libretto sets the music around the time just preceding World War I, near to when it was originally created and premiered. Amid references to the dawn of Cubism, Einstein’s theory of relativity and Heisenberg’s uncertainty principle, promotional materials attest that the dance/theater mixture “seamlessly joins minds, bodies and voices for a riveting reflection on the score, . . . the ballet’s rich history . . . [and] its lasting cultural influence.” It also now includes interviews with a distinguished musicologist, words from soldiers returned from the Great War and writings on theoretical physics by the string theorist Brian Greene.

With set, costume and lighting designs by highly respected and longtime collaborators James Schuette and Robert Wierzel, The New York Times has described “A Rite” as “a serious, intricate, multi-directional centennial tribute to a work of art whose spell it deepens.”

Kennedy Center and other awardee Jones is known for addressing significant social and political issues in his movement-based oeuvre. This seems directly in line with that. His dancers are exquisite, voracious space-eating instruments, each compelling in individual ways. Bogart has been revitalizing contemporary American theater since the early ’90s. Can’t beat this combination.