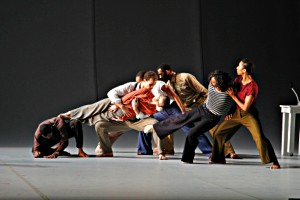 As is often the case, choreographer/director/author and Kennedy Center Awardee Bill T. Jones is pushing the envelope. Having spent four years developing his new “Analogy Trilogy,” the ensemble is taking up residence on the Royce Hall stage to present the three pieces in succession in two shows Saturday and Sunday, November 3 and 4. Presented by the Center for the Art of Performance at UCLA, the production begins at 2 p.m. each day and concludes with an audience-interactive Q&A session just before 9 p.m. Seven hours with intermissions between parts one and two and a dinner break before part three (5:30-7 p.m.).

Wow! Can we, as devoted dance and performance fans, handle all that action in one day? How do the dancers do it? Knowing the company’s oeuvre, it’s doubtful that they’ll be sitting in chairs and twiddling their thumbs in front of us. No, they’ll probably be moving their athletic bodies in rhythmic, expressive and innovative ways accompanied by an original sound score played live by composer Nick Hallett, pianist Emily Manzo, baritone Matthew Gamble and the ensemble.

Created by Jones in collaboration with the company’s assistant artistic director, Janet Wong, the three works investigate external and internal ideas of war. Through movement, sound, song and spoken word, each section takes on a different narrative. “Analogy/Dora: Tramontane,” “Analogy/Lance: Pretty aka The Escape Artist” and “Analogy/Ambros: The Emigrant.” These creations came about after the artist became aware of his 98-year-old mother-in-law’s story as a French Jewish nurse and social worker and his African American nephew Lance’s battles with drugs. The final episode jumps off from the W.G. Sebald historical novel, “The Emigrants.”

The San Francisco Chronicle called it “a dance-theater roller coaster with surprises around every corner.”