Book Review: Adventures in the Scream Trade by Charles Long 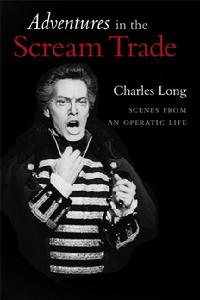 For two decades Charles Long was one of a handful of American baritones at the top of the international opera scene. Singing opposite such luminaries as the late Shirley Verrett, Carlo Bergonzi, Sam Ramey and other legendary stars, he was known for his gleaming high notes, meticulous musicianship and infallible dramatic rightness. At the peak of his power, he was felled by a career-ending medical condition and retired from the stage.

Silent for 20 years, Long has now written a fascinating memoir detailing his meteoric rise, his untimely crash and spellbinding stories of his strange life among the inhabitants of the realm of Grand Opera. “Adventures in the Scream Trade: Scenes From an Operatic Life” reveals the underbelly of this esoteric art form as intensely political, surprisingly salacious and frequently hilarious. Long’s reminiscences of his lengthy residency in the “Scream Trade” are crisp and muscular, replete with entertaining metaphor and rich with eclectic references worthy of Dennis Miller.

This book is unapologetic in sharing the unattractive aspects of the biz, along with its glories. Some chapters deal bitingly with former adversaries – yes, writers have the last word. But Long does not shrink from exposing his own foibles and failings – honestly and courageously shining a glaring light onto his own dark side: “This increased sense of competition brought out my worst nature. I cultivated a latent, inborn blood lust [and] lunged fully into my Warrior Phase. Most artists are neurotic in one way or another, but I crossed a line into an unwholesome place.”

Other chapters speak eloquently and movingly of colleagues vanquished by the AIDS epidemic of the 1980s that decimated the ranks of the international opera world. Through it all, the glorious music of Verdi, Puccini and other immortal composers pulses and throbs in the uncanny rhythms of Long’s prose.

Late in the book, Long speaks of his transition to writing: “Unfortunately, creativity is not an option. A compulsive desire at the core of creative people generates an indefinable energy toward being original and provocative, a need to express, through art, music, literature, dance, and drama, the profound emotions they experience… If a painter’s hands become paralyzed, he will use his teeth. If a dancer loses her legs, she will choreograph. When a singer is robbed of his voice, he will pick up a baton, or write, perhaps… [We] don’t have a choice.”

“Adventures in the Scream Trade” is published by Mountain Lake Press in three formats – hardcover, e-book and audio book. I highly recommend the audio book, read with great humor, panache and style by the author, and featuring musical excerpts from Long’s own live performances on the world’s great opera stages.

To order, go to http://mountainlakepress.com/buyourbooks.html.