‘Bravo Beethoven’ at the Bowl 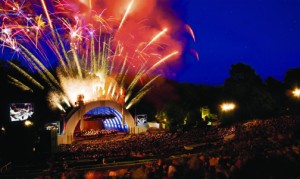 Fireworks at the Hollywood Bowl/photo by Fred George

Internationally acclaimed pianist Paul Lewis teamed up with the LA Phil at the Hollywood Bowl Tuesday evening under the direction of Bramwell Tovey to perform Beethoven’s Piano Concerto No. 2 in B-flat major. Other works on the all-Beethoven program included the Egmont Overture, Op. 84, and Symphony No. 2 in D major, Op. 36. These selections each represent unique episodes in Beethoven’s development across several genres.

Paul Lewis is described as one of today’s most distinctive and poetic pianists, and that reputation is clearly deserved if this performance was any indication.

The emotive pianissimo sough of Lewis’ Adagio was truly captivating. He achieved an intimacy that was uncanny in the Bowl. The audience was so spellbound that not a single glassy clink competed with his potent performance, as all eyes and ears were fixated on his magnificent artistry of movement and musical nuance. The effect was indeed poetic.

Lewis fully indulged in the effulgence of the music, making for an inspired event.  There was a perfect symmetry of attack and decay that he beautifully tempered to fashion each individual note and phrase. The legato passages were flawless and fluid, yet every note was distinct and informed by Lewis’ grasp of the work.  In the up-tempo passages, he gave us nimble, light Beethoven as he deftly navigated breathtaking classic flourishes from pianissimo to fortissimo. His precision and control were amazing. It was a unique musical moment worth witnessing: young Beethoven showing-off. As Tovey amusingly pointed out to the audience, the Concerto No. 2 was in fact his first in chronological order of publication, and Beethoven himself first performed it as a 24-year-old pianist-composer in 1795, while still a student of Haydn.

The second half of the concert opened with a brief digression by Tovey that gave insight into influences from Beethoven’s life and politics at the time of these works and how the world around him was changing dramatically with the rise of Napoleon and the artistic impact of “the Italians.” Symphony No. 2 is “old-school” Beethoven; it precedes the decidedly romantic Symphony No. 3 by more than pure sequence, and so it is still overtly classical and curiously optimistic. It reportedly has never been performed at the Hollywood Bowl, and for that matter is the least played of Beethoven’s symphonies generally. As it turned out, this belated Bowl premiere was worth the wait.

The opening sforzandos demanded our attention, and the Philharmonic never let go of it, taking us on a brilliant romp through the classical halls of Vienna.  Tovey, given the moniker of the “hottest hot-weather conductor in America” by the Baltimore Sun proved worthy of the praise. Again, the Largo was inspiring.  The clarinets blended beautifully, and Principal Lorin Levee played superbly.  The strings sang as one body under Concertmaster Alexander Treger. The orchestra capably skipped through Beethoven’s abruptly shifting moods and variant themes of the Scherzo and Allegretto. There was something wonderful about the suitability of this particular symphony in a venue like the Hollywood Bowl.

This remarkable concert began with a playing of the Egmont Overture that was solid but itself unremarkable. As incidental music of its day, it was written to accompany Johann Wolfgang von Goethe’s play about the Flemish Count Egmont’s battle for freedom against the Spanish Duke of Alba, and contained themes we know from Beethoven’s later works. The flute and oboe principals, Catherine Ransom Karoly and Marion Arthur Kuszyk, were noteworthy, and their musical presence was significant. Tovey seemed to restrain the Overture somewhat, but still rendered a version sufficiently ebullient without overshadowing the extraordinary works that followed.

The “Bravo Beethoven” program will be repeated Thursday, July 16. A treat awaits you.