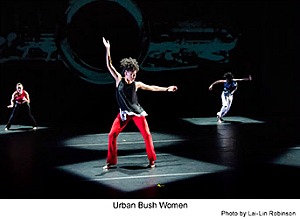 UBW will present the West Coast premiere of  “Walking with ‘Trane,” which they describe as being “inspired by the musical life and spiritual journey” of jazz innovator John Coltrane. Divided into two sections, “Side A: Just a Closer Walk With Trane” and “Side B: Freed(om),” each has an original score by composers Philip White and by George O. Caldwell.

“SHE WHO: Frida, Mami and Me” will open the show in its world premiere performance by Contra-Tiempo. Known for its fusion of salsa, Afro-Cuban, hip-hop and contemporary dance with theater, text and original music, the company examines the life, mythology and properties of Mexican visual artist Frida Kahlo and Nigerian deity Mami Wata.

Both companies’ missions are to give voice to usually unheard communities — African American and Latino — and tell stories through movement, sound and the breadth of the theatrical palette. UBW doesn’t make it to the West Coast very often, and Contra-Tiempo, though locally based, spends much of its time on the road. The newly refurbished Ford Amphitheater, nestled against a Hollywood hill, is an exquisite location for an end of the summer evening. Bring warm clothes.

The Ford Theatres are located at 2580 Cahuenga Blvd., East Hollywood 90068 (just off the 101, between Hollywood and Universal Studios in the Cahuenga Pass). Tickets are $30-$70 and can be purchased at the box office, by phone at (323) 461-3673 or at https://secure.ticketsage.net/websales.aspx?u=fordtheatres&pid=302516. More info at https://www.fordtheatres.org/calendar/ford-signature-series-urban-bush-women-and-contra-tiempo.