By the Way, Meet Vera Stark at the Geffen Playhouse 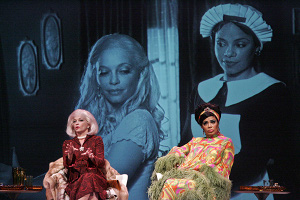 Amanda Detmer and Sanaa Lathan in “By the Way, Meet Vera Stark” at the Geffen Playhouse.

Theatergoers like surprises, so I was delighted when what seemed to be a rather conventional madcap comedy called By the Way, Meet Vera Stark, currently onstage at the Geffen Playhouse for its West Coast premiere, abruptly shifted gears and fractured into a myriad of perspectives. The result is a much more complex and multi-layered commentary than I had expected on race, perception, fame and Hollywood. Can we call it a racism comedy?

The genesis of the story idea for Vera Stark came to Pulitzer Prize-winning writer Lynn Nottage haphazardly. She was watching TV late one night and happened upon a 1930s film called Babyface, which featured a young black actress named Theresa Harris. Googling the actress’ name afterwards, she was intrigued to find a slew of websites dedicated to exploring the lives of African-American actors in early Hollywood. The more she dug, the more she learned about what it meant to be a black actor in Hollywood, both before and after the restrictive Hayes code was instituted in 1934.

Nottage conceptualized a character named Vera Stark, a talented black actress relegated to “mammy” roles, who eventually found some measure of enduring fame before mysteriously disappearing in the 1970s. Along with the play, ably directed by Jo Bonney, the creators have built two websites that support a false “legend” and biography of Vera Stark, including a documentary clip complete with interviews of real Hollywood personalities commenting on the “life” of Vera.

All the scenes in the first act take place within a mythical Hollywood studio in the early 1930s. We are introduced to Vera, her starlet mistress and future co-star Gloria, aspiring actresses Lottie and Anna Mae, as well as Vera’s future husband Leroy. Particularly enjoyable is Kimberly Hébert Gregory as Lottie, who is a veritable catalog of old Hollywood lore as she sings and performs dramatic snatches from old film roles. While the playwright goes for a few easy laughs using the clichéd meme that plays off clueless whites against wise blacks, that’s only a small part of the comedic landscape. Other references range from the Shakespearean — using disguised lovers — to TV sitcom slapstick à la The Jeffersons. It’s all in good fun.

In the second act, things get more interesting. The curtain rises to reveal a large screen upon which is running the flickering (and fake) 1933 classic film The Belle of New Orleans starring Vera and Gloria in the roles that defined their careers. It’s a dreadful piece of filmmaking — humorously so — oozing with melodrama and fossilized racial role-play. And then the playwright pulls the rug out from underneath us: the film stops, the lights come up, and we in the audience are suddenly part of the play; we now play the role of “audience” at a 2003 colloquium discussing the films of Vera Stark. The foppish moderator is joined by a pair of critics, a militant lesbian and a highfalutin academic, to discuss the meaning of Vera’s contribution to American culture.

Even better is when they progress to discussing Vera’s reemergence in the early 1970s. We begin ping-ponging back and forth in time as they play “clips” from Vera’s appearance on a 1973 TV talk show. This time, the flesh-and-blood actors portray the guests and host of the talk show, who freeze and darken into shadow as the colloquium moderator stops and starts the segments. It is an ingenious theatrical device and works very well. The 1973 feel is captured perfectly. Actress Sanaa Lathan, who plays Vera, is at her best here as the boozy, Vegas-saturated diva, resplendent in a mod Pucci outfit.

Using filmed recollections of others who knew Vera (think Citizen Kane), we experience both sides of the opposing ideas of old vs. young, black vs. white, modern vs. classic, and so on. In the midst of it all, we begin to get hints and insinuations about Vera and Gloria, and a secret they share. There is a “surprise” revelation at the end, and a brief moralizing wrap-up about freedom and slavery that seems somehow more suited to TV. But to me, that part seemed superfluous compared to the funhouse mirror effect of the staging. Go see By the Way, Meet Vera Stark for a look at how inventive and enjoyable modern theater can be in the hands of experts.

By the Way, Meet Vera Stark continues through Oct. 28 at the Geffen Playhouse. Visit http://geffenplayhouse.com/.