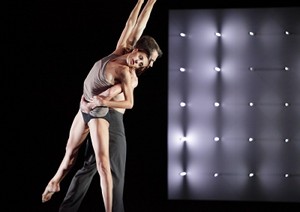 This weekend, the Center for the Art of Performance at UCLA is presenting one of today’s hottest choreographers on the international circuit in the prestigious Royce Hall. Multi-award-winning British dance maker Wayne McGregor and his company, Random Dance, will offer the Los Angeles premiere of their evening-length contemporary work “Far” for only two performances on Friday and Saturday, Jan. 24 and 25, at 8 p.m.

Inspired by the Age of Enlightenment and the 18th-century French philosopher Diderot’s very first set of encyclopedias, promotional materials assert that the dance is “bold, immediate, cryptic, intense and illustrative of McGregor’s ongoing exploration into cognitive research.”

The artist has made a name for himself with innovative collaborations mixing “physically testing” dance, film, music, visual art, technology and science. “Far” is set against a visual backdrop by rAndom International and lighting designer Lucy Carter and accompanied by a mesmerizing score composed by Australian experimentalist Ben Frost.

In the hour-long work, the 10-member company will take the audience on a journey that sounds tremendously intriguing, via bodies in motion alongside the adjoining cerebral connections.

Besides directing his own company, McGregor is the Resident Choreographer of The Royal Ballet and the company has been a Resident Company of Sadler’s Wells since 2001. He has also created works for Paris Opera Ballet, San Francisco Ballet, Stuttgart Ballet, New York City Ballet, Australian Ballet, English National Ballet, NDT1 and Rambert Dance Company, among others.

Obviously, this is an event not to be missed.

Royce Hall is located at 340 Royce Drive, LA 90095. Tickets ($30-$50) are available at http://cap.ucla.edu, at all Ticketmaster outlets, by phone at (310) 825-2101 or in person at the UCLA Central Ticket Office located in the southwest corner of the James West Alumni Center. Student rush tickets, subject to availability, are offered at $20 one hour before showtime to all students with valid ID.