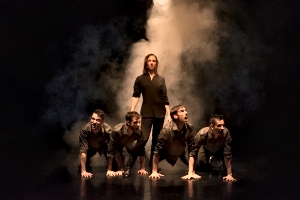 American modern dance pioneer Martha Graham brought her milieu to our northern neighbor in the middle of the 20th century. Like here, it was celebrated in the dance lexicon as a revolutionary means of movement expression. But Canada’s connection to this U.S.-founded art form is currently not very apparent. Our maple leaf colleague’s contemporary scene maintains a stronger bond with the European aesthetic. At the same time, it has established its own personality that, at times, has had global influence. This Friday, Oct. 26, the Quebecois company Cas Public will make its Los Angeles premiere of  “9” at the Theatre Raymond Kabbaz at 7:30 p.m. This single performance welcomes an audience as young as 9 years old.

Be forewarned. This is not a primary-colored comic creation that only children would enjoy. Choreographer Hélène Blackburn and five dancers explore the world of hearing disability and silence. Using both gestural and balletically based languages, the artists physicalize this aural limitation and reveal what is uncovered. Inspired by one of the performer’s personal experience with deafness, the movers evoke an experience similar to the musical grandeur that’s part of Beethoven’s Ninth Symphony and its “Ode to Joy” — created, but never heard, by its composer.

“9” is accompanied by an original score by Martin Tétreault, films by Kenneth Michiels and text by Johan De Smet.

Tickets: $15-$25 and can be purchased at http://tinyurl.com/ofmdyxh