“Cassiopeia” at the Theatre @ Boston Court 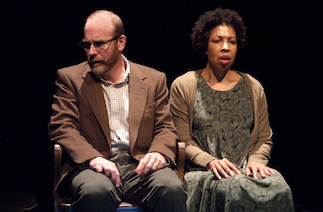 In David Wiener’s play “Cassiopeia” at the Theatre @ Boston Court, two characters — Quiet and Odetta — reveal a lifetime of isolation and longing. Odetta, deemed ugly and unlovable by her own mother, is a black maid from the rural South. Quiet, a math genius with fixations so strange that he sets off alarms in people around him, cannot relate to anyone. They are thrown together during a turbulent plane ride, and Odetta realizes that he is the man with whom she had shared a vivid and meaningful encounter some years back. He insists that he is not the man she remembers.

They tell their life stories through stream of consciousness monologues that often overlap and collide. Their world views are very different: He measures everything by scientific principles; she relates to the world through her body, heart and soul.

This is not a play with a lot of action. We are, after all, listening to the life stories of two people who live largely in their heads. Director Emilie Beck keeps her cast moving smoothly and cleanly toward a crescendo of emotions. Angela Bullock as Odetta and Doug Tompos as Quiet embody their characters, eliciting strong empathy for these damaged souls.

PaSean Wilson is The Voice, a character that sometimes narrates, sometimes forms a musical bridge between moments in the play and sometimes becomes a river — by way of a mesmerizing costume designed by E.B. Brooks. Wilson displays impressive vocal skills, although neither the character nor the music feels entirely integral to the script.

Stephen Gifford’s set reflects the difference between Quiet and Odetta by splitting the stage. Each character occupies an area meant for one person only. Odetta’s area is earthy and the windows that frame it ignore symmetry. Quiet’s area is clinically clean with linear and symmetrical windows. Jeremy Pivnick’s lighting is wonderfully enveloping at just the right time.